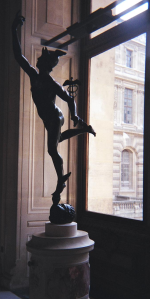 Does he steal in on a soft breeze from the window? Ducking into shadow, yet posing for a moment in the daylight, a figure in constant motion dancing on the wind’s breath.

Such words could describe this bronze statue of Mercury, the Roman version of the Greek god of travelers and thieves, merchants and shepherds, and the messenger of the gods, Hermes. Born at night, Hermes famously snuck out of his home—and from his mother’s watchful eye—to steal the cattle of his brother, the sun god Apollo. So the placement of this figure is rather fitting.

Though a technique typically associated with oil painting, chiaroscuro with its tonal contrast of light and dark, drawing attention to the three-dimensionality of a subject, can apply equally as well to photography.

But what story shall be told? A museum-goers experience, a mystical experience, or something more? What might the god of communications spur you to write?

Each month, The Poisoned Martini presents a photo to spark your creativity. Because of their visual nature, images vividly speak to writers and spark ideas for writing.  View the photo above, ponder what you see, and then put pen to paper or finger to keyboard.  Write a scene, a short story, a chapter, a novella, or maybe even a novel.

Last month’s challenge featured an aquatic scene with dangerous fish. The plethora of piranhas were snapped in January 2017 at the Georgia Aquarium in Atlanta, the largest aquarium in the Western Hemisphere.