“In winter all this pleasure came to an end, for the windows were sometimes quite frozen over.  But then they would warm copper pennies on the stove and hold the warm pennies against the frozen pane.  Soon a little round peephole would appear, and through these holes beamed the soft bright eyes of a little boy and a little girl.  Their names were Kai and Gerda.”

Kai and Gerda, the central characters of Hans Christian Andersen’s “The Snow Queen”, do not appear in the Disney animated feature, Frozen, which is very loosely inspired by Andersen’s classic fairy tale.

Danish author Hans Christian Andersen (1805 – 1875) wrote several fairy tales over the course of his life.  In 1844, “Snedronningen”, translated as “The Snow Queen”, appeared for the first time in his third collection of fairy tales.  The tale–one of his longest stories–may be read as a coming-of-age and the bloom-of-first-love story, and interestingly, it is one of the few fairy tales in which the girl saves the boy.

Andersen’s tales are not necessarily always happy ones.  “The Little Mermaid” has a downer ending, and “The Little Match Girl” has got to be one of the saddest stories ever written.  Quite understandably, Disney’s version of the tale is vastly different. Unlike previous fairy tale adaptations, Frozen diverges drastically from its origins.  There are some elements of the original tale, but they are used far more subtly.

The original story began with a wicked hobgoblin crafting an evil mirror.  “He made a mirror that had the power of making everything good or beautiful that was reflected in it shrink to almost nothing, while everything that was worthless and bad was magnified and looked worse than ever.”

It’s not long before the mirror is fragmented and “even the smallest fragment had the same power as the whole mirror.”  The fragments could distort one’s vision.  Worse, if a fragment lodge in a person’s heart, “their hearts became cold like a lump of ice.”

The mirror does not exist in Frozen per se.  However, a shard of ice freezing one character’s heart and another character’s personality traits are suggestive of this wicked artifact’s nature.  Instead of Gerda’s quest to find Kai who has been kidnapped by the Snow Queen, younger sister Anna journeys to find the Snow Queen, her sister who fled the kingdom after her ice powers were exposed.

The transformation of the Snow Queen from antagonist to protagonist (or deuteragonist, depending on whether one views Anna or Elsa as the main character) was ultimately prompted by the creation of the pivotal song, “Let It Go.”  Though numerous changes to the story began far earlier as efforts to bring the story to screen date back as far as 1937.  Read about these efforts and the writing of Frozen here.

There’s no denying that Frozen is a likeable, diverting movie.  The setting of Arendelle is magical, aptly capturing its Norwegian inspirations.  The songs are stellar; no one can deny the attraction and power of “Let it Go”, sung by Idina Menzel.  The characters and circumstances are engaging, but the storytelling here, likely due to the aforementioned story changes, is somewhat lacking.

Please note: spoilers may lie ahead…

Even stories for children need to consider logic, and there’s a glaring plot point here.  The apparent obligatory need to remove the loving parents from fairy tales is in ample force here.  There is a reason this plot device is used in fairy tales.  It leaves the hero or heroine vulnerable to tragic circumstances and villainous antagonists that they will then need to overcome.  There’s nothing wrong with taking Elsa and Anna’s parents out of the picture.  What is problematic is that, in this instance, it also leaves the country of Arendelle without a ruler.  Who is in charge?  The girls are not of age when they are orphaned, and there is seemingly no beloved servant looking after them or kind minister serving as regent.

This particular point is exacerbated later in the film when Anna leaves to find Elsa, who has fled after her powers are revealed.  Anna leaves Hans Westergaard, a foreign prince visiting from the Southern Isles, in charge.  Is there really no chancellor, secretary, cabinet member, anyone in all of Arendelle looking after the kingdom’s affairs?  Hans is the only person available?  Being left in charge of organizing efforts to keep the citizens safe, that’s one thing.  To leave him running the country, is quite another.

Plot holes aside (another is revealed in the comments section), the film is an entertaining diversion with a wonderful message about sisterly love.

The voice acting here is excellent.  Idina Menzel is pitch perfect as Elsa and her rendition of “Let It Go” rivals her performance of “Flying High” in the stage musical, Wicked.  Kristen Bell makes for a delightful Anna, and Jonathan Groff as Kristoff and Santino Fontana as Hans were well-suited to their roles.  As a Broadway vet, Groff’s Kristoff could have had more songs, though.  And as Olaf, the snowman who loves warm hugs, Josh Gad makes for an entertaining comic sidekick. 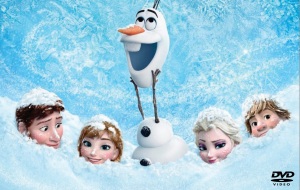 Frozen is a film for all ages.  Winning an Oscar for Best Animated Feature and Best Original Song, the movie is available on DVD and Blu-ray.  Surprisingly, a 3D version has not been released, at least on disc.  The snow and ice creations would have been intriguing to watch as they formed in 3D.

Please note: comments below may include additional spoilers.

Some of the above quotes come from the Pavel Tatarnikov illustrated version of Andersen’s The Snow Queen, adapted from a 1872 translation by Mrs. H. P. Paull.  The Tatarnikov book was released by Purple Bear Books in 2006.