Have you ever hosted a murder mystery party?  It can be a lot of fun.  The idea of hosting one certainly appealed to me, having participated in a few over the years.  As a mystery writer, I particularly liked the idea of crafting an original mystery rather than using an out-of-the-box set.  In many ways it’s like writing a mystery novel, except that you merely have to create the outline of characters, clues, and plots. 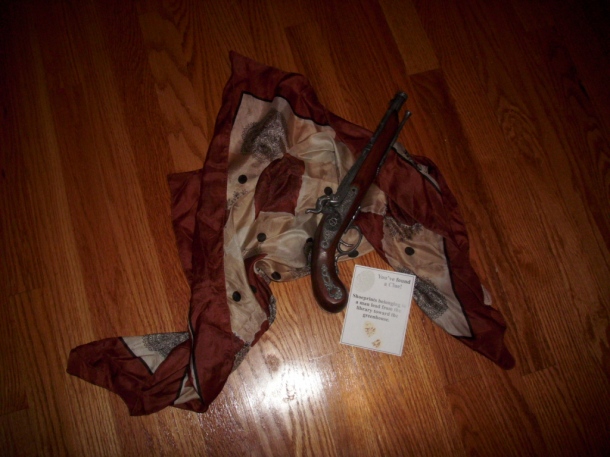 A woman’s scarf, an antique pistol, and a statement…

This year I decided to revisit the very first murder mystery evening theme I created way back in 2008.  It was certainly “original.”  I hadn’t yet considered the idea of using one of my existing novel/plot ideas.  I crafted the story to suit the number of attendees so that each person would play a suspect/character.  But I began with the victim…

“Professor Peabrain, a collector of rare books and antiquities, is dead.  The professor was expected to retire from his position at Syracuse University after the end of the semester.  Who is a suspect in the professor’s untimely death?”

Having props in hand (see photo), I used them along with “Clues” (like the one pictured) to give participants something tangible to find.  You can read more about plot details in my post from a few years back, Hosting a Murder Mystery II.

The idea in revisiting this particular theme was the thought that it could be the basis for a short story or novella.  It hadn’t been conceived with that purpose in mind, but there is no reason why it can’t be adapted.  After all, I’d gone on to use several of my murder mystery plots as party themes over the years.

So now the task is figuring out how.

I used loony character names like Professor Peabrain, Lord and Lady Snobb, Sister Nonesuch, and Swami Medium.  While these are great for a light-hearted evening of fun, they really won’t work in a mystery story with a more serious tone.  Not to mention I’d like to incorporate series characters I’ve created if possible.

For instance, I had Col. Savage and Madge Savage as neighbors of the professor.  In my first novel, Death on Stoneridge, readers may have noted the characters of Mildred Hawthorne and Col. Martin Hawthorne.  The Hawthornes pre-date the Savages.  I’d written Death on Stoneridge in its first incarnation more than twenty years ago!  The Savages were created especially for the murder mystery party.  I hadn’t really thought of using my own characters back then.

But now, for a written version, I could easily see the Hawthornes filling in for the Savages.  Some circumstances will need to change, but having built-in characters with an established history might yield new ideas.  Ideas that could be tested out in a new version of the story as a murder mystery party.

I intend to write more about this process as it unfolds.  Part of that includes two other murder mystery evenings ripe for re-visioning.  My second mystery evening was entitled, “Murder in Masquerade”, and followed a similar creation path to the murder of Professor Peabrain.

The other “original” plot/story was set in Ancient Rome and was first referenced in my post, Hosting a Murder Mystery I.  This makes it a far more difficult project.  I’m not really interested in writing an historical mystery set in the time of the Roman Empire’s glory days.  It would be too much of a departure from my Syracuse Mystery series.  But the idea of my characters participating in a murder mystery evening with just such a theme might make it work.

In the meantime, share your experiences of participating in murder mystery parties.

« Writing Challenge 40
Chapter by Chapter: The Mystery of Edwin Drood »