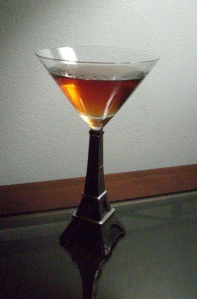 Vive France with this Friday’s cocktail, the Napoleon.

This classic cocktail has been around since the 1920s, having been invented by famed bartender Henry Craddock at the Savoy Hotel in London.  The drink named for Napoleon Bonaparte (1769 – 1821) makes use of the quinine aperitif Dubonnet, which was first created for the French Foreign legionnaires, serving in North Africa, to fortify themselves against malaria.  It’s doubftul Napoleon would have approved the use of the very British gin in such an honorary drink, but perhaps one taste might have swayed him.

There have been variations, however, of the recipe.  The classic version calls for Grand Marnier, but others have suggested any orange-flavored liqueur such as Tripe Sec, Cointreau, or Curaçao.  If you use Curaçao, use the clear version, not the blue.  This site also suggests Lillet Rouge as a possible substitute for Dubonnet, which may not be easy to come by.  Personally, I’ve found Lillet Blanc more readily.

Pour 2 ounces of gin and 1/2 each of Grand Marnier and Dubonnet in a shaker over cracked ice.  Shake and then strain into a cocktail glass.  Optionally, serve it up with a maraschino cherry as a garnish.

How I like it:  Today’s cocktail glasses being larger than yesteryear’s may necessitate larger proportions.  For the pictured drink, I used 2 1/2 ounce gin and 3/4 ounces each of Grand Marnier and Dubonnet.  The important thing is to maintain the ratio of proportions.  Also, Grand Marnier is truly the best option for this cocktail.  It blends very well with the Dubonnet and gin.  For gin, I used Bombay Sapphire.

Avoid your own Waterloo, drink responsibly!