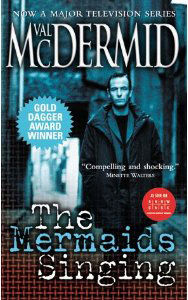 The Mermaids Singing is a very well-craftet, taut psychological thriller in which a very careful, organized serial killer stalks the streets of Bradfield, a fictional northern England city.  It is not a story, however, for everyone.

The story opens with a murderer vactioning in Italy and visiting “the one tourist attration I really wanted to see.”  The Museo Criminologico di San Gimignano, ” a museum of criminology and torture.”  The chilling prologue ends with a realization, the killer thinking, “I was going to have to become a killer, the memory of the torture museum rose before me like a muse.  I’ve always been good with my hands.”

The narrative is interspersed with these recorded “recollections” of the killer detailing the work of creating torture devices and luring victims to their deaths.

Three murders have occurred, when on the morning of the first chapter, Tony Hill, Assistant Chief Constable Jon Brandon, and Inspector Carol Jordan all wake up with the dread.  Tony is set to give a speech before a group of police touting the creation of a profiling task force.  Meanwhile, Brandon is wrestling with how to bring a profiler (Tony) on board the investigation, and Carol wonders how to convince bigoted superiors to accept that there is a serial killer on the loose.  Unfortunately, they are aided in their respective tasks by the discovery of body number four.

“For a man who lived his life behind the shield of learned behaviours, penetrating a killer’s facade was the only game in town.”  Tony quickly takes up the challenge of profiling the killer.  He sees it as a cerebral exercise as well as a means to prove the value of his work to the police force at large.  “It was a battle of wits now, his insight against the killer’s stockade.  Somewhere in the pattern of these crimes there lay a labyrinthine path straight to a murderer’s heart.”

Carol points out to a fellow officer, “When we look at a crime, we look for physical clues, leads, things that point us to who we might want to talk to or where we might want to look.”  Of Tony’s profiling she aptly states, “When he looks at a crime, he’s not interested in all that stuff.  He wants to know why the physical clues happened the way they did so he can work out who did it.”

Unfortunately, in a case of doctor being his own worst patient, Tony uses his insight to profile the killer, who he nicknames “Handy Andy,” while failing to realize the danger he himself is in.  He happens to fit the killer’s “type”.

“You mean the killer could target you? asked Carol of Tony in a prescient moment.

When Carol first meets Tony, we learn he is “around five-eight, slim, good shoulders, narrow hips, legs and trunk in proportion, short dark hair, side parting, dark eyes, probably blue, shadows under the eyes, fair skin, average nose, wide mouth, lower lip fuller than upper.”  In short, once the victims’ particulars are laid out in the course of the narrative, it is apparent that Tony shares their physical traits.

Carol also assesses Tony as potential dating material in additional to his professional skills.  She says, “Talking with Tony was like talking to an equal who had no axe to grind, whose primary concern was finding a path to the truth rather than a way to boost the ego.”  Something she finds very refreshing.

Though the relationship remains on a professional level for this book, the potential for a tension-filled relationship as the series progresses is firmly established.

Tony, however, is a “sexual and emotional cripple” as he says in his own words, though we don’t know why.  He’s cognisant of this, but unable to use his own psychological insight to remedy it.  Instead, he finds help in an unlikely source; a mysterious woman–later identified as Angelica–phones Tony and appears to chip away at his crippling emotional wall.

When he finally completes his detailed profile of the killer, Tony realizes, “These were the footsteps of his own personal nemesis that he was tracing, and it was an uncomfortable journey.”  He’s also about to face this very nemesis in a more personal matter and will have to use everything he knows to survive.

As stated before, The Mermaid’s Singing is not for everyone.  This is a dark story with depictions of torture and sexual perversions.  Some readers cringe at being taken into the mind of a serial killer.  For those who enjoy the explorations of the human mind, this story is worth the read.  The killer here doesn’t fit the typical serial killer mold.  Tony and others note the lack of escalation and the careful planning in staging the bodies where they’re found.

The book’s title is taken from a line in the T. S. Eliot poem, The Love Song of J. Alfred Prufrock.  “I have heard the mermaids singing, each to each.  I do not think that they will sing to me.”

The Mermaid’s Singing served as the pilot episode for the British series, Wire in the Blood, starring Robson Green as Tony and Hermione Norris as Carol Jordan.  The series began in 2002 and takes its title from McDermid second book in the Tony Hill/Carol Jordan series.

The pilot changes a few details around, but otherwise, is a fairly faithful adaptation.  Most of the other episodes expand on the characters and circumstances established in the book series as well as deviate from it.  The four season of the TV series has seen the depature of Carol Jordan’s character.