This month’s writing challenge offers up a tranquil scene.

To spark your creativity, The Poisoned Martini features monthly images to get you started.  Such images, because of their visual nature, vividly speak to writers and spark ideas for writing.  The idea is to view the image below and to write a scene, a short story, a chapter, a novella, or maybe even a novel.

Last month’s feature presented two images, two vantage points of the same scene.  Once an enlisted men’s mess hall, this dilapidated red brick building was built in 1892 on the Madison Barracks across from the limestone buildings, known as Stone Row, in Sackets Harbor, New York.  The hall clearly had fallen into disrepair by the late 1990s when these photos were taken.  In 2013, the Watertown Daily Times reported that the mess hall and another historic building, a theater, were slated for demolition.  Sadly no one has apparently found a use for the buildings which stood unoccupied for 60 years.   View the image here.

For this month’s challenge, The Poisoned Martini presents another landmark.  Not a building, but an object that harkens back to earlier times when large swaths of forest ruled the land.  Will it inspire a story of contemporary or historical times? 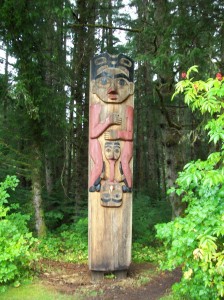