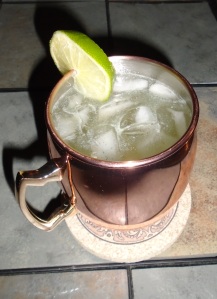 It’s Winter! It’s Friday! It’s time for a cocktail! Pull out a fancy mug for the Moscow Mule!

In the past couple years, this cocktail has been making a resurgence. I’ve noticed it appearing on more and more specialty drink menus. However, it’s origins date back to the 1940s.

According to an article in the New York Herald Tribune (July 28, 1948) and excerpted in a blog post by George Sinclair.:

“The mule was born in Manhattan but “stalled” on the West Coast for the duration. The birthplace of “Little Moscow” was in New York’s Chatham Hotel. That was back in 1941 when the first carload of Jack Morgan’s Cock ‘n’ Bull ginger beer was railing over the plains to give New Yorkers a happy surprise…”

The Moscow Mule is one of those drinks that was ostensibly created to popularize and sell brands of liquor. Two men, John G. Martin and John “Jack” A. Morgan, joined forces to create the drink.  Martin worked for an East Coast spirits and food distributor, selling Smirnoff vodka, and is credited with serving up the drink in a copper mug. Morgan was president of Cock ‘n’ Bull Products which produced ginger beer, one of the key ingredients.

According to Wikipedia, “The cocktail became popular during the vodka craze in the United States during the 1950s.”

Combine 2 ounces of vodka and 1 ounce of lime juice (fresh is a plus) in a shaker over cracked ice. Shake and strain into a copper mug over crushed ice. Fill the mug with chilled ginger beer (about half a bottle’s worth). Serve up it up with a lime wedge (or slice) and a mint sprig as a garnish.

How I like it:  <Gasp.> Horrors! I must admit I am not particularly a beer fan. However, I’ve found I quite like ginger beer. I used Barritts brand for this cocktail along with Russian Standard Vodka. And while it’s true some recipes substitute ginger ale, I don’t recommend it. It’s just not the same.