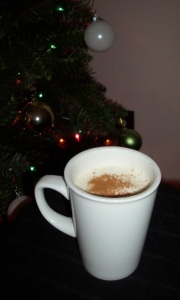 This Friday–’tis still the season–try an old traditional Christmastime cocktail, the Tom and Jerry.

No, it doesn’t have anything to do with that famous cat and mouse duo.  This drink is far older, dating back to the early to mid-1800s depending on which origin is accurate.  In one version, a British journalist is credited with the drink’s creation;  see more here.  According to Esquire, the drink originated later in St. Louis; she more here.  Regardless, the Tom and Jerry is essentially a variation of eggnog, the classic seasonal drink which dates back to Revolutionary times.  This particular Yuletide concoction doesn’t appear on many menus today, even seasonally.  Unless you’re in Wisconsin or Minnesota (and surrounding areas) and apparently in Jamestown, New York.

This one takes some effort to make, but the result is well worth it.

Prepare your eggs first, separating the white from the yolks.  Each should be in its own bowl.   Beat the whites until frothy.  Add sugar and stir a little more.  Beat the yolk until it forms a batter which you will then fold into the egg white mixture.  Stir all together.  Add in your choice of whiskey and brandy (or cognac), stirring as you go.  Pour the mixture into a mug to about the halfway mark.

In a saucepan, either heat milk or water (or both) until nearly boiling.  Depending on what you use will effect the consistency of the drink; milk for more, water for less thickness.  Add to your mug until full.  Then sprinkle nutmeg on top and serve warm.

Now, you may have noticed I didn’t say anything about proportions.  It depends on how much you intend to make.

For a single serving, use 1 egg.  4 teaspoons of sugar.  1 ounce each of whiskey and brandy.  1/2 cup of milk (or water or combination of the two) and a dash of nutmeg.  Multiple this by the number of expected servings.  You may want to make more than you need; people will likely want a second!

How I like it:  One could substitute store-brought eggnog for the raw egg used, but the flavor won’t be quite as good if you do it yourself.  For the whiskey, I used Jim Beam Honey; the infused honey certainly added to the flavor and worked fantastically.  For the brandy, I choose to use a cognac.  I also only used 1/2 of each instead of a full ounce.  A consideration for those who don’t want the liquor overpowering their eggnog.

Please note: consuming raw ingredients may pose a health risk.  Needless to say, this is one drink that should not sit out for several hours.