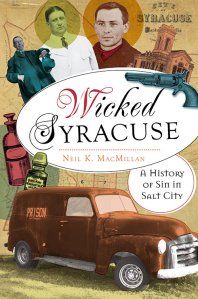 Every city has its secrets…

“Like any city, Syracuse holds secrets.  Some secrets are simply things that don’t get said, but others are juicy–the stuff scandals, soap operas and miniseries are made of.  If stalwart heroes made Syracuse a vibrant, growing city, so too did the miscreants that dot the city’s history.”

Reading like the crime blotter in your local newspaper, but with more flair, Wicked Syracuse recounts the seedier side of the Salt City’s history.  The entries are short, but varied.  Author Neil K. MacMillan recounts tales of riots, gambling, kidnapping, arson, murder, prohibition, and prostitution.  The book contains numerous photos and illustrations, many of which are examples from the period rather than relating to Syracuse directly.

As for the stories within, did you know that the case which inspired the novel, and subsequent movie, Double Indemnity had a Syracuse connection?

The very real Henry Judd Gray, a dapper salesman, was arrested in Syracuse at the Onondaga Hotel in 1927.  He had fallen in love and conspired with Ruth Snyder to murder her husband.  The trial would inspire James M. Cain to write two famous stories.  The basic story is presented here, but a mention of its connection to noir literature is not.

Perhaps this is because the trial wasn’t held in Syracuse but in Long Island closer to where the crime had been committed.  And this slim volume, in any case, is not just about any one story.  It is a collection of several and varied sinful tales that make up the fabric of Syracuse’s illustratious–or notorious–past.

Consider the men pictured on the cover.  One was a young man who rose to become the youngest mayor of Syracuse, at age 28, and accused a common councilor of corruption.  Antoher was a roguishly handsome train robber, and the third sued a former President of the United States.  They are (from left to right) James K. McGuire, the “boy” mayor; train robber Oliver Curtis Perry, and William A. Barnes, Jr. who sued Teddy Roosevelt for libel.

Also, of particular note is the mention of the Jerry Rescue.  In 1951, abolitionists defied the Fugitive Slave Act and thwarted an attempt by federal marshalls to return an escaped slave to his owner.  A monument in honor of the event is located in Downtown Syracuse’s Clinton Square, not far from the site of the rescue.  The book’s account is cursory, as are many of the stories, but it’s an excellent starting point for those interested in the city’s history.

There’s a lot to discover here.  Though again, it’s more like a survey course introducing readers to the colorful characters and history of a Central New York city.  The appeal may be somewhat restricted to CNY residents and history buffs, but compendium volumes such as these give us all a glimpse into an earlier era.  For writers, these volumes are invaluable for understanding a place or a region that serves as a setting.  The stoires can inspire ideas and pique interest in researching more, especially for historical tales.

Wicked Syracuse was researched using The Post-Standard Archives and materials on file at the Onondaga Historical Association.  It was released in mid-2013, and is available in print and ebook formats.