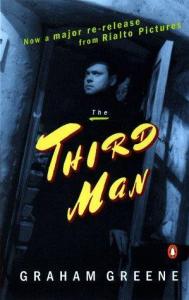 Graham Greene’s The Third Man has the aura of familiarity about it. It’s one of those works that’s part of the collective consciousness, much like Romeo and Juliet, Gone with the Wind, The Maltese Falcon, and several Greek myths, that—whether or not one has seen or read them—we have a sense of their basic story or plot line.

Prior to writing the screenplay, Greene wrote the novella. The story is narrated from the point of view of Major Calloway who explains, “I have reconstructed the affair as best I can from my own files and from what Martins told me.”

Martins, in the novel, is Rollo Martins. He’s a novelist of cheap paperback Westerns in need of a holiday and he’s been invited to Vienna by his old school chum Harry Lime.

“In normal circumstances a cheerful fool. Drinks too much and may cause a little trouble. Whenever a woman passes raises his eyes and makes some comment, but I get the impression that really he’d rather not be bothered. Has never really grown up and perhaps that accounts for the way he worshiped Lime.” 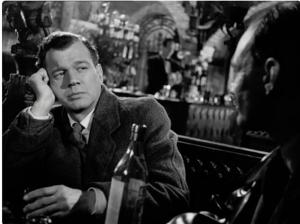 Rollo arrives in Vienna only to learn that Harry has been killed in a motor car accident and is to be buried that afternoon. Stunned by the news, Rollo attends the burial and later drowns his sorrows at a bar where he meets Calloway.

From Calloway, Rollo learns that Harry Lime “was about the worst racketeer who ever made a dirty living in this city.” In fact, a criminal case against Lime had been filed and he “would have served a long spell” if “it hadn’t been for the accident.”

Rollo meets with the various friends and acquaintances of Harry and begins to suspect there’s more to Harry’s death.

“It was a shot in the dark, but already he had this firm instinctive sense that there was something wrong, though he hadn’t yet attached the word ‘murder’ to the instinct.”

He returns to Harry’s flat and learns from a neighbor that “There were three people who helped to carry your friend to the house.” Two were known “friends” of Harry, but the mysterious third man is apparently unaccounted for. A short time later, the neighbor Herr Koch is murdered presumably because he witness seeing this “third man.”

Rollo realizes how odd it all was. “Don’t you think that it was odd they were all there – at the death? Everybody knew Harry. Even the driver, the doctor…”

Rollo will eventually work with Calloway to uncover the truth. Along the way, he will fall in love with Harry’s girl, actress Anna Schmidt, and be mistaken for a renowned lecturer.

All the while, the story unfolds against the backdrop of post-war Vienna, in 1948, when the city was “divided up in zones among the four powers; the Russian, the British, the American, the French zones, regions marked only by notice boards, and in the centre of the city, surrounded by the Ring with its heavy public buildings and its prancing statuary, the Innere Stadt under the control of all Four Powers.”

The Cold War, a popular spy novel staple, is very much in its early stages. The central crime here is the racketeering of war profiteers and a scheme to sell watered-down penicillin that results in the death of innocent children and others. One of the central conceits of the novel is its twist that savvy readers may anticipate because of that déjà vu, that sense of familiarity that’s seeped into our collective consciousness. Nonetheless, the story is a compelling read that’s both cinematic and suspenseful.