Home › Mystery › Do or Diner 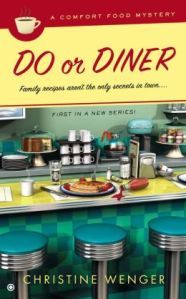 Culinary mystery fans have a new series to sample.  Do or Diner is the first in the Comfort Food Mystery series by author Christine Wenger.

Trixie Matkowski has just taken over her aunt and late uncle’s diner, the Silver Bullet, when the the worst thing that could befall a budding restaurateur happens, the local health inspector dies after eating the diner’s daily special.  Someone spiked his dish with poisonous mushrooms, but where did they come from?

“This wasn’t going to be good for business,” narrates Trixie, and true to form the diner goes from bustling hangout to ghost town.  That suits the town’s mayor, Rick Tingsley, just fine.  He’s been wanting to buy the diner and the land its on for his own ambitious development project.  Might he have tried to kill two birds with one stone?

In some cozy mysteries I’ve read, the police would immediately pin Trixie as the guilty party.  Even though she’s barely been in town a few days!  So I was quite pleased that here, the police don’t consider Trixie a serious suspect.  Though that might have something to do with Deputy Tyler ‘Ty’ Brisco.

Ty is a recent transplant to Sandy Harbor, NY.  The Texas cowboy is renting a room above the fish bait shop which is part of the property—along with the diner, an old Victorian house, and twelve lakefront cottages for summer rental—known as the Point and now owned by Trixie.  Early on, Trixie sees Ty and comments, “He must be off duty as he was in full cowboy regalia, and he looked fabulous.  Not that I noticed.”  There’s a number of similiar observations on Trixie’s part throughout the novel.  It’s clear where these two are headed … especially as the series progresses.

Naturally Ty wants Trixie to let him and the police handle the investigation, but with her business suffering, Trixie takes matters into her own hands and starts snooping.

The murder is a particularly tricky one.  The diner’s cook, Juanita, served up a plate of the daily special to food critic Marvin Cogswell.  She later reveals that she left the kitchen unattended, during which time someone could have slipped in the unlatched back door and added the deadly mushrooms to the victim’s plate.

Clues, however, seem rather spartan.  Many of the suspects are introduced well after the crime and their whereabouts at the time of the murder are sketchy at best.  Some pointed clues do appear in time to suggest to savvy mystery reader whodunnit, though a surprising connection might remain elusive.

Contemporary cozies, though, don’t seem to be so much about the mystery as they are about the characters.  And my, are there some characters here!  There’s the victim, a unsavory mooch; the muumuu wearing Antoinette Chloe Brown, a rival restaurateur; frosty Roberta Cummings, the victim’s girlfriend; and the aforementioned mayor and his Jackie O. wannabe wife.  This is in addition to the presumably recurring series characters, such as gossipy spinsters, May and June, and the waitresses and staff of the Silver Bullet.

There’s at least one suspect I’d love to see team up with Trixie for future hijinxes, but that may prove difficult as it would be a spoiler for potential latecomers to the series.

Besides its characters, the book truly shines when presenting scenes at the Silver Bullet Diner.  The Dinerese talk was particular fun.  Any guesses as to what ‘two cowboys on a raft’ and ‘a wrecked hen and an order of done dough with axle grease’ might be?  It was quite fun to guess what these diner orders might be, and the translations were smoothly integrated into the story.

As a bonus, the book contains recipes for various dishes mentioned in the course of the story.  I might suggest the Wacky Cake and Snowball Cookies as the standouts.  And yes, there’s even one for the daily special, sans mushrooms.

Give Do or Diner a try—though perhaps not on an empty stomach—when it releases on August 6, 2013.  And for more about author Wenger and this upcoming title, check out my interview with her here:  Part I.  Part II.

Please note: this review is based on an uncorrected proof of the forthcoming title, Do or Diner.