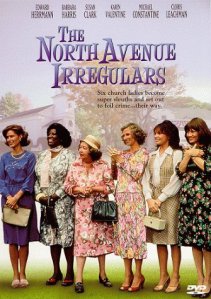 Normally I don’t give away the endings of books or movies, but this one’s smash ’em up car derby is just the best one ever!

I loved this movie from the first time I saw it in the theaters back in 1979.  From the opening cartoon intro to the zany misadventures of the six church ladies staking out the mob, this movie captured my young imagination.  I remember searching out toy cars to match the ones in the movie and playing out the car chases and demolition derby in my room.  Though I’d expect no one to believe me now, I remember imagining watching the movie on a TV screen whenever I wanted in pre-VCR days!

In North Avenue Irregulars, Reverend Hill (Edward Herrmann) comes to takeover as minister to North Avenue Presbyterian Church and discovers a hot bed of crime: gambling that is.  It seems racketeers plague not only his parish, but the whole town.  When he’s contacted by a Treasury Department agent (Michael Constantine), Rev. Hill recruits a bunch of church ladies to chase down the crooks.

The ladies here are fantastic!  There’s Susan Clark as the church secretary who’s father was the previous minister.  She doesn’t like Rev. Hill or his idea of fighting crime, at first.  Clark later when on to play the mom in the TV series, Webster.  Then there’s Patsy Kelly, Karen Valentine, Virginia Capers, Cloris Leachman, and probably my favorite in the movie, Barbara Harris.  Also, Ruth Buzzi of Laugh-In fame makes a scene-stealing appearance late in the movie.

Then we have the codenames!  As pictured left to right in the above photo: Rookie (Clark), Clunker (Capers), Blarney Stone (Kelly), Phantom Fox (Leachman), June Bride (Valentine), and Kiddie Car (Harris).  There’s some great memorable dialogue here, too.  It’s one of the few movies, along with Clue (1985), that I can quote several lines from!

Produced by Disney, North Avenue Irregulars was difficult to come by in the advent of VHS.  My dad had to special order my first copy of it!  Since DVD came along, it’s been a lot more accessible, and I recommend it for family viewing.  It’s all G rated fun and nobody really gets hurt.  Is it realistic?  Maybe.  Maybe not…

Now you may be surprised, but this movie is actually based on the book, The North Avenue Irregulars: A Suburb Battles the Mafia by the Reverend Albert Fay Hill.  Published in 1968, I heard that it’s based on a true story out of New Rochelle, New York.  And just recently, I discovered used copies of it for sale so I will have to look into this further.