To survive, Wardwick of Hurog plays the role of simpleton; to regain a kingdom, Ward must prove his mettle and his worth.

“Hurog means dragon.”  As we discover several times during the course of the two novels that–to date–tell the story of Ward, heir of the Shavig throne; his family, and the land of the Five Kingdoms. 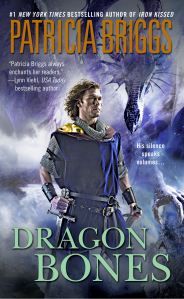 In the first 20 pages of Dragon Bones, we learn a great deal about Ward’s cursed family.  His sister is mute, his younger brother has fled, his mother seeks escape in drugged reverie, and Ward’s tyrannical father, who beat his sons near to death, is at last dying.

Ward becomes the new Hurogmeten, but in name only.  He does not trust his uncle enough to reveal his true, intelligent nature.  And then it is too late; a writ from the High King will cause Ward to loose everything.  He will be incarcerated in the Asylum unless he can somehow become a hero.  With a few trusted souls, Ward heads south to fight the Vorsag plaguing the southernmost of the five kingdoms, Oranstone.

Oranstone lost a rebellion years ago and even now chafe under the High King’s rule.  This comes into play with the second book, Dragon Blood. 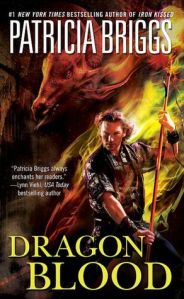 Four years after the events of Dragon Bones, Ward is a hero to his people and rules as Hurogmeten.  The High King, however, has other plans.  To get revenge against Ward’s cousin Beckram–once the queen’s lover–the High King wlll enforce the writ to commit Ward to the dread Asylum.

The High King’s wizards drug and torture Ward so that his mental prowess in court will prove him incompetent to rule Hurog.  More alarming, Ward learns that his blood–his family’s bloodline–will give the High King the ingredient needed to power an ancient and terrible artifact.  With the help of outside forces, Ward manages to thwart the High King’s plan.

Now, Ward must discover the secret rebellion against the king and join with them to end the threat to him and his family.

Author Briggs, best known for her urban fantasy series featuring shapeshifter Mercy Thompson, has created an intimate fantasy.  The five kingdoms does not appear to be a vast continent, only a portion of one.  The adventures are more focused on the characters than great battles or defeating a great evil.  This smaller scale is ideal for readers who may not have time to slog through vast tomes or numerous books comprising a series.

This does not mean they are simplistic stories.  Veteran fantasy readers may anticpate some conventions and plot twists, but these characters have strong motives for what they do.  The depth of characterization is quite sophisticated.  Some circumstances though do not recommend it for young readers.

The third persion limited narration is mainly from Ward’s point of view.  However, there are occasional breaks from this.  In the first book, Beckram, his twin Erdrick, and courtier Garranon give us a view of the High King’s capital and the political machinations therein.  In the second book, Tisala, Ward’s love interest, and again Garranon fill in gaps in Ward’s viewpoint.

These and other characters quickly interest readers and make us care about them and what happens to them.  Ward is a likable hero/protaganist.  Tisala is a strong heroine, saving herself from a despicable torturer early in book two.  As a more secondary character, Beckram shines; at first he appears very much the feckless dandy at court, but the actions of the High King change him, maturing him for he better.  Then there is Oreg.  Another tortured character, Oreg is initially bound to serve the Hurogmeten, whoever that might be.  His relationship with Ward is perhaps the most fascinating one to read.

Together, both novels are an enjoyable and entertaining read.  I wanted to know more about this world.  Elements such as the dwarves, dragons, and the pantheon of gods…they were well incorporated, but surely they only scratched the surface.

Of the two, Dragon Bones is the weaker story.  After an excellent set up, Ward’s adventures in Oranstone lack direction–though this may well have been intentional.  The question of what’s behind the Vorsag raids brings the story back into focus, but things come together all too quick for a too neat resolution.

However, book one should be read to best enjoy and understand book two.  In Dragon Blood, Ward is a hero, a leader, and a protector.  Why then does he not desire to sit upon the High King’s throne?  Even some of the rebellion’s supporters question his motives right up until the end…a very satisfying one.

Yet is the story really done?  These books were written in 2002 and 2003 respectively.  There appears to be no mention of the author continuing Ward’s story or setting a new one in the Five Kingdoms.  Curiously, her official website (here) takes its name from these stories, Hurog.

By the way, author Patricia Briggs might just possibly have the best layout for information about her books I’ve ever seen on the ‘net.  Check it out here.

« The First Mystery I Ever Read
Friday Cocktail »