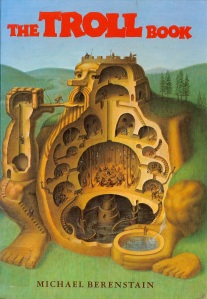 With the recent release of The Elder Scrolls: Skyrim—an awesome game by the way—which is set in the homeland of the Nords, I’m reminded of one of my first forays into Norse Mythology.  As a kid, I discovered The Troll Book at my local library and checked out—more than once—this informative look at the lore of Trolls.

Although the name Berenstain is more familiar in connection with some well-known bears, author Michael Berenstain, son of creators of the Berenstain Bears, published this standalone children’s book in 1980.  Examining “the distinctive features, habits, and neighbors of the troll,” this nearly 60 page book is a fantastic read for anyone with a budding interest in mythology or fantasy novels.

Trolls are ugly creatures noted in Scandinavian folklore.  The Troll Book presents this lore as a modern compendium, geared for children, and treats the subject as manner of fact.  There are even mentions of subspecies of trolls, like the Night Trolls who turn to stone if caught in sunlight or the Little Trolls of Denmark who are considered more like dwarves.  From activities to family life, this picture book has it all.

There are even short tales within the larger story.  The legend of St. Laurentius of Sweden and his encounter with a troll contains elements similar to the story of Rumplestilskin.  Two other tales relate the process of turning a man into a troll and the origin of the hidden folk and their kin.  Elves, Dwarves, Tomtes (who are akin to the more familiar Roman Lares),  Skogsra are just a few of the other Hidden Folk mentioned.

Berenstain’s illustrations perfectly illuminate this subject and are as fascinating as the tidbits of information about these creatures.  A wonderful addition to any child’s—or child at heart—collection of fairy tale and mythology books.