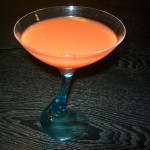 Try something a little different this weekend and experience a Ward Eight!

I first came across this drink in the pages of GQ magazine, which would feature a classic cocktail in a one-page article.  And of course, there’s a fun story about this one!

The Ward Eight cocktail originated in Boston in the late 1890s.  Shortly after reading the article about this drink, we happened to vacation in Boston (about a 100 years later!).  I wanted to dine at the Union Oyster House in the historic North End, and by happenstance, we were seated in a booth on the second floor which was favored by former President John F. Kennedy when he dined there.

I was all geared up to order a Ward Eight.  It had been invented in Boston after all.  But they’d never heard of the drink!  Fortunately, I knew the ingredients and remembered the proportions from the article!  Unfortunately, that was really the only time I’ve had it.  I try not to “stump the bartender” too often.

Pour 2 ounces of whiskey, 1/2 of orange juice, and 1/2 ounce of lemon into a shaker over cracked ice.  Add in a splash of grenadine.  Shake and then strain into either a martini glass or pour into a rocks glass over cubed ice.  Garnish with a maraschino cherry or two.

How I like it: With a little more orange juice.  I add a full ounce of orange juice and for the splash of grenadine, I use about a tablespoon.  There are more variations to this drink as is true of many a cocktail that’s been around for decades.  I’ll have to hunt up that page from GQ I saved from so many years ago and see if it matches up.

In the meantime, remember to drink responsibly!