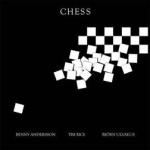 I’ve always enjoyed the game, and the musical is one of my top ten favorites!

Back in the 1980s when I was first developing a taste for popular music, there were three songs that I’d hear on the radio that I loved.  One of those was One Night In Bangkok.  In buying my first music cassettes (yes, cassettes!  How archaic!) I searched for the song and discovered it was part of Chess.  I couldn’t wait to listen to the song, but I wanted to listen to the whole musical first.

The orchestra started up and the singing began.  What is this?  I wondered.  It sounds like opera.  These people are singing about some Swiss or Italian town, Merano.  Could I have possibly been mistaken?  Then the rock chords of an interjection by the “American,” singing SRO.  That’s more like it.  I continued to listen and was wowed.  With songs like Nobody’s Side, Anthem, Heaven Help My Heart, and I Know Him So Well, the album is more pop/rock hits than musical.

The cast included Murray Head (the American), Tommy Korberg (the Russian), Barbara Dickson (Svetlana), and Elaine Paige as Florence.  Paige is a treasure.  Her voice is amazing.  She originated the roles of Grizabella in Cats and Eva Peron in Evita, both in London’s West End.  She’s one performer I would love (and have yet) to see perform live.

Believe it or not, Chess was created by Benny and Bjorn from ABBA (who later produced Mamma Mia) and Tim Rice, who’d previously collaborated with Andrew Lloyd Webber.  At the time, these names didn’t really mean anything, but I loved the music.  I just never got to see it performed.  Just teaser clips of the original production.  Then Chess morphed.

The musical finally came to Broadway in 1988, but the producers made a few changes to the story.  Song lyrics changed.  Some songs were cut and others added in, and most importanly, Elaine Paige, who originated the character of Florence was unable to perform on Broadway.  I’d heard rumor that Paige was ineligible to perform because she wasn’t an American, but casting changes by the production team to make the character “younger” were more likely to blame.  Needless to say, the production was less than successful.

I did listen to the Broadway cast album, but just didn’t quite like it as much as the original.  I thought Philip Casnoff as the American was decent, but I really didn’t care for the actress singing Florence.

Then the show changed yet again.  A melded version of the two production’s (the original and Broadway) was developed, and I was finally able to see it done locally, though not as a professional production.  About this time (around 2002), I’d heard that the show had been revived as a successful Swedish language production (clips of which I’d seen online), and then I heard about a concert version.

In 2008, at the Royal Albert Hall in London, Josh Groban, Idina Menzel (Wicked) and Adam Pascal (Rent) performed a concert program of Chess that has been deemed an “official version” after years of tinkering, plot and song changes.  And it was filmed!  I eagerly awaited the release of this DVD in 2009 and was not disappointed.  It was a worthy version and done quite well.  Even though it’s not performed like a traditional musical, it is staged like one.

I do recommended this underrated musical, especially the original cast album or the more recent Royal Albert Hall production.  Despite the few number of times I’ve seen it performed live (once so far!), it remains one of my top ten favorite musicals.