A new decade has dawned! But before we get much further into 2020, it’s time to take one last look at the last decade (and last year), and see what the most popular mysteries were in 2019. Based on circulation figures at my local library, these were the most checked out mysteries in 2019.

10. Robert B. Parker’s Blood Feud by Mike Lupica — There have been other authors to take on the mantle of the late Robert B. Parker to continue his characters’ stories, but this is the first one since 2014 that I’ve seen in the top ten! In Blood Feud, PI Sunny Randall is drawn into her ex-husband’s family business when he’s nearly killed as part of a potential turf war.

9. In a House of Lies by Ian Rankin—The skeletal remains of a private investigator who went missing ten years prior brings Detective John Rebus out of retirement to solve a cold case of murder.

8. Broken Ground by Val McDermid—5th book in the series featuring DCI Karen Pirie. Pirie’s latest case begins with a woman uncovering the inheritance her grandfather left her at the end of World War II. The inheritance was buried in a Highland peat bog along with a body shot between the eyes.

7. Broken Bone China by Laura Childs— It’s death by hot air balloon when Theodosia Browning and Drayton Conneley witness the demise of a local software company CEO. And it’s not long before Theodosia and Drayton learn there were several motives and suspects for the murder in this latest (and 20th) Tea Shop Mystery.

5. The Guilty Dead by P. J. Tracy—A philanthropist appears to take his own life one year after his son died from an overdose. Minneapolis detectives Leo Magozzi and Gino Rolseth soon suspect that the philanthropist’s death was no suicide, and Grace MacBride’s Monkeewrench Software team begins to unravel clues and connections to a larger plot.

4. Kingdom of the Blind by Louise Penny—Inspector Gamache is mysteriously named as one of three executors of an elderly woman’s estate. Her unusual will leads Gamache to question the woman’s sanity until a body is found. Meanwhile, Gamache is also faced with fallout from a previous investigation and a missing load of narcotics. 14th book in the series.

3. Shell Game by Sara Paretsky—In the 19th V.I. Warshawski novel, V.I. heads to Kansas “on the trail of a vanished film student and a faded Hollywood star.”

2. Watching You by Lisa Jewell—Murder and obsession consume a seemingly quiet neighborhood in Bristol, England. A newlywed becomes infatuated with a handsome high school principal whose son dreams of becoming a spy, and a single mother is convinced she’s being stalked by the principal, but her daughter fears her mother’s mental decline. 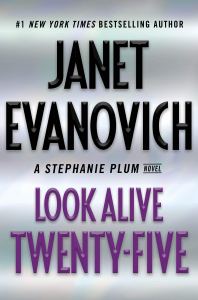 And the Number One Mystery of the Year is …

And there you have it, the most popular reads of 2019. I should mention that both Janet Evanovich’s Look Alive Twenty-Five and Lisa Jewell’s Watching You also cracked the overall top ten of fiction reads at my library.

Most of these authors in the top ten and honorable mentions are familiar names (and ones who’ve made appearances on past year’s lists), but it’s always interesting to see new names. Erin Lindsey and Lisa Jewell are a bit of a surprise here. British author Jewell is known for her popular fiction titles, but her more recent novels are quickly gaining traction among readers in the suspense/thriller genre. And Lindsey has shifted from her Bloodbound fantasy series to tackle a new genre with great success.

So are you delighted or disappointed by the top reads of 2019? How many have you read? Which books made your 2019 top ten list? What are your speculations for 2020 and mystery reading resolutions for the new year (and decade)?