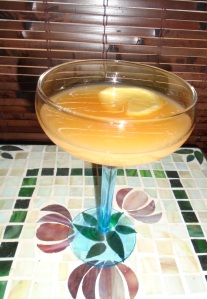 Time for some monkey business for this Friday cocktail; try The Monkey Gland.

It may sound unappealing, but the drink is actually rather enjoyable with its citrus-y flavor and hint of something more. That something more would be Absinthe. Seemingly the popular drink of choice for artists, poets, and writers of Jazz Age and earlier when it was widely available. Absinthe was banned in the United States and much of Europe from 1915 to the late 1990s. In the interim, Pernod was often used as a substitute. Although some recipes cite Benedictine as an alternative for this particular concoction.

Now, the name of the drink is certainly a curiosity! Proprietor Harry McElhone of Harry’s New York Bar in Paris is credited with this drink’s creation in the 1920s. Apparently, he named it after the controversial experiments of Russian doctor Serge Voronoff. Let’s just say that most would rather not know the origins of the cocktail’s name.

Pour 2 ounces of your preferred gin in a shaker over cracked ice. Add in 1 1/2 ounces of orange juice and 1/2 ounce of grenadine. Then add in a dash or two of absinthe (or a substitute like Pernod). Shake and then strain into a coupe glass. Optionally, garnish with a slice or twist of orange.

How I like it:  Several variations of this recipe only call for an ounce of orange juice, but that proportion seems a bit lacking in taste. And while only a dash or two of absinthe are called for, I’ve added closer to a teaspoon. This adds a little more balance to the citrus versus absinthe’s anise flavor. But it’s worth experimenting a little to suit your own tastes. Though generally served straight up, the Monkey Gland would also worked well on the rocks.