By Its Cover: Red Line 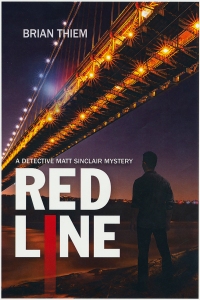 A lone figure, his back to us, stands by the shore beneath an expanse of bridge.  The bridge is ablaze with lights as dusk deepens in the background.  A literal red line bleeds through the title.

Colors matter.  Vibrant colors catch our eye and make us notice them.  The lights on the bridge drew my attention (like a moth drawn to a lighted window at night), enhanced by the stark red line.  The title, too, in bold white letters stands out against the darker background.  Its a modern cover for a contemporary story.

So who is the mysterious figure at water’s edge?

According to the synopsis, “When a teenager from a wealthy suburb outside of Oakland, CA is dumped at an inner city bus stop, homicide detective Matt Sinclair catches the case. It’s his first since being bumped to desk duty for a bust that went south… fast. With few leads and plenty of attention, it’s the worst kind of case to help him get back up to speed.”

I’d venture to say the lone figure is the teenager, but that depends on Sinclair’s age and whether the teenager is male or female (two facts which cannot be determined from exterior sources).

The synopsis continues, “the bodies start to pile up—first at the same bus bench, then around the city. Sinclair is unable to link the victims to each other, and the killer is just getting started. Time is running out on Sinclair’s career, not to mention the people closest to him.”

Perhaps what most recommended this particular police procedural is the information about the author.  Author Thiem is “a veteran of the Oakland police department and the Iraq war.”  And the text further suggest that the book is “filled with the kind of insight that could only be written by a detective who has walked the streets and lived the life.”

Sometimes an author’s experiences can be a deciding factor in adding a book to the “to be read” pile, but to reach that information, the cover first has to grab our attention.

Red Line was released in several formats (hardcover, paperback, and ebook) on August 11, 2015.