It’s Monday, the start of the work week.  Monday, derived from the Old English word Mōnandæg, is the “moon’s day.”  In fact, it’s the day of the moon in many languages.  From the Latin lunae dies, it’s lunes in Spanish, lundi in French, lunedi in Italian.  The cognate in modern German is montag.  So is it any wonder that just like once in a blue moon, there’s a Blue Monday cocktail? 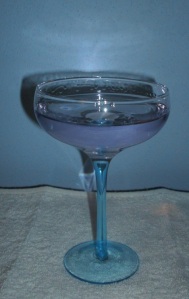 Blue Monday has been designated as the third or fourth Monday in January, when those of us in the Northern climes are considered to be the most depressed by gray skies and bleak weather.  The appellation naturally conjures up the idea of a melancholic day ideal for brooding or drowning one’s sorrows.

But whether or not you consider Monday the first or second day of your week, depressing or uplifting, consider taking the rare Monday to celebrate and toast with a Blue Monday cocktail.

Appearing in the 1964 edition of Old Mr. Boston De Luxe Official Bartender’s Guide, the recipe is fairly straightforward.  Proportions are quite a bit smaller that today’s standards.  The recipe only calls for 1 1/2 ounces of vodka and 3/4 ounce of triple sec.  I’ve had to double that!  Today’s cocktail glasses are apparently much bigger than yesteryear’s.

In a shaker over cracked ice, pour in 3 ounces of vodka, 1 1/2 ounces of triple sec (or Cointreau).  Add in a dash of blue food coloring.  Shake and then strain into a cocktail or coupe glass.  Optionally, instead of the food coloring, add a teaspoon of Crème de Violette.

How I like it:  Now here’s the rub.  I consider food coloring a cop out in the world of mixology.  It’s like cheating.  I’ve seen several recipes call for Blue Curaçao, which would enhance the orange flavor of the drink.  But consider a liqueur that’s nearly as rare as a blue moon, use Crème de Violette instead.  Crème de Violette will give a more subtle blue color (well, technically it’s more indigo) and add a subtler floral flavor.  Truly a special enhancement for a once in a while drink.

« By Its Cover: Jonathan Kellerman’s Killer
Chapter by Chapter: The Mystery of Edwin Drood … Afterthoughts »