Chapter by Chapter: The Mystery of Edwin Drood VII

“WHEN SHALL THESE THREE MEET AGAIN?”

The title of Chapter Fourteen asks a curious question.  To which three characters is it referring? 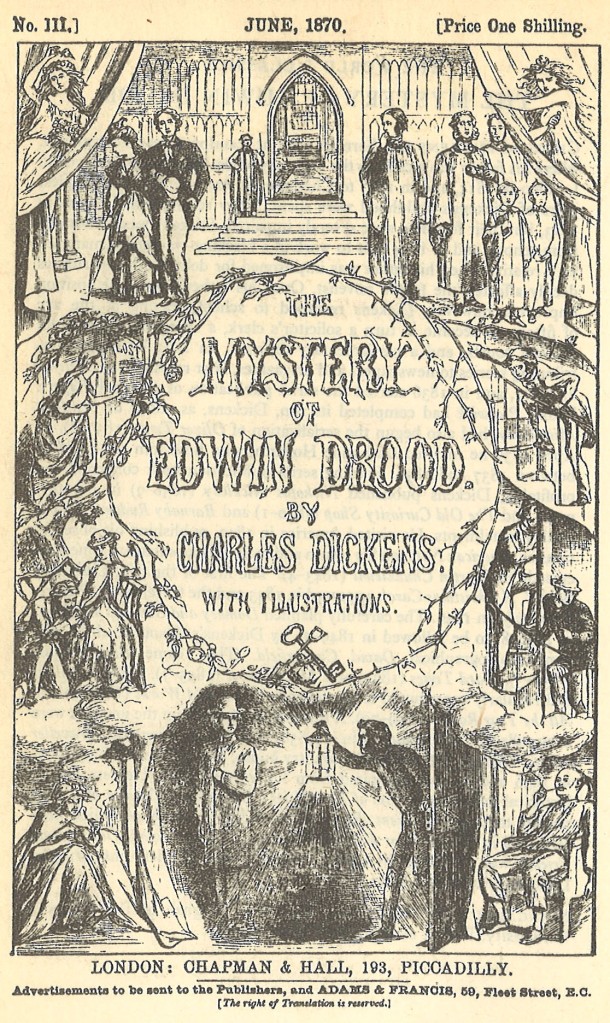 Christmas Eve has come to Cloisterham.  “Lavish profusion is in the shops” and elsewhere, as Dickens describes the Yuletide scene in Cloisterham before turning to the matter at hand.  “Three are to meet at the Gate House to-night.  How does each one of the three get through the day?”

First up is Neville Landless.

Neville spends time tidying up.  He arranges his books and destroys stray papers that do not relate to his studies.  Most curiously he sets aside “stout shoes and socks for walking” and packs a knapsnack.  He bought the knapsnack new along with a heavy-walking stick.  “Strong in the handle for the grip of the hand, and iron-shod. He tries this, swings it, poises it, and lays it by.”

He meets his sister and confesses to her that “I am engaged in a miserable struggle with myself, and that a little change and absence may enable me to come through it the better.”  He intends to take a walking expedition for a fortnight.  The Rev. Crisparkle is also aware of this plan and of the walking stick.  However, both Helena and Crisparkle have noted how heavy Neville’s walking stick truly is.

Now we turn to Edwin Drood.

“Edwin Drood passes a solitary day.  Something of deeper moment than he had thought, has gone out of his life; and in the silence of his own chamber he wept for it last night.”  This would seem in reaction to his and Rosa’s understanding in the previous chapter to end their engagement.  His mind quickly turns to thoughts of Helena Landless with whom he is secretly enamored.  Briefly he wonders if Rosa was aware of such feelings.

His watch in need of attention, he takes it to a jeweler’s to have it wound and set.  “He tells the [jeweler] that he wears no jewellry but his watch and chain, which were his father’s; and a shirt-pin.  The jeweler mentions that Mr. Jasper, having previously stopped in the shop, is aware of these articles.

Leaving the jeweler’s he strolls about, thinking of how he’s not likely to see Cloisterham again.  “He becomes quite aware of a woman crouching on the ground near a wicket gate in a corner… He sees the woman is of a haggard appearance, and that her weazen chin is resting on her hands, and that her eyes are staring–with an unwinking, blind sort of steadfastness–before her.”

Edwin asks after the woman and to his surprise, notes a remarked similarity in symptoms to a look his uncle had suffered.  The woman confesses to a rattling cough.  Her condition is one Drood seems acquainted with.  He asks if she eats opium, but she replies that she smokes it.  She continues to say that she is up from London, “looking for a needle in a haystack.”

After Drood gives her “three and sixpence”, like a fortune, she asks his name and then tells him, “You be thankful that your name ain’t Ned.”  Why?  Because “it’s a bad name to have just now… A threatened name.”  Drood leaves her and resolves not to mention the occurrence, except to mention it to Jack “who alone calls him Ned.”

And finally we come to John Jasper, who “passes a more agreeable and cheerful day than either of his guests.”

Jasper happens upon Mr. Sapsea and tells him of his guests coming to dine that night.  Mr. Sapsea disapproves of Neville as “Un-English.”  Later, Crisparkle notices Jasper’s high spirits.  “I am wonderfully well,” Jasper tells him.  Crisparkle says, “One would think, Jasper, that you had been trying a new medicine for that occasional indisposition of yours.”

Walking with Crisparkle, Jasper tells him that he plans to make “antidote to those black humours; and you said you hoped I would consign them to the flames.”  He is referring to the dark diary he has kept and which he has previously spoken to Crisparkle about.  Parting with Crisparkle he heads home to the Gate House and up the postern stair.

The chapter comes to a close.  “The red light burns steadily all the evening in the Lighthouse on the margin of the tide of busy life.”  “THe Precincts are never particularly well lighted.”

It is a violent night.  “Violent rushes of wind … blowing out many of the lamps.”  “Flying dust from the earth, dry twigs from the trees, and great ragged fragments from the rooks’ nests up in the tower.”  All these are tossed about by a “boisterous gale.”  “The violent rushes abate not, but increase in frequency and fury until midnight, when the streets are empty, the storm goes thundering along them, rattling at all the latches, and tearing at all the shutters…”  Even the hands of the Cathedral clock tower are torn off.

In the early morning, as “a crowd of early idlers” assess the storm’s damage, Jasper loudly inquires, “Where is my nephew?”

“All the assembled eyes are turned on Mr. Jasper, white, half dressed, panting, and clinging to the rail before the Minor Canon’s house.”  Drood had gone with Neville down to the river last night “to look at the storm.”  Neville left early in the morning.  The chapter leaves us with the unspoken question, “What has happened to Edwin Drood?”

And so the mystery of the story has finally begun.  Is it a straight-forward case?  Is it merely about an uncle killing his nephew because he loves his nephew’s fiance?  Is Neville an easy scapegoat?  Why was the haggard woman in Cloisterham?  So many questions, but as yet, not many answers.  What are the fine details of that stormy night?

Stop by next week for Chapters Fifteen and Sixteen.