Home › Mystery › For Your Eyes Only

For Your Eyes Only 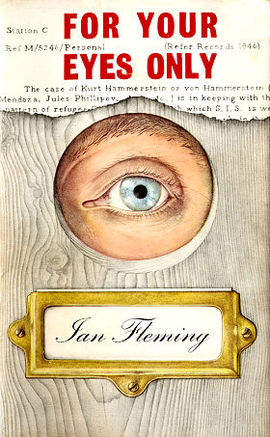 “M replaced the stamp and the ink pad in the drawer and closed the drawer.  He turned the docket around and pushed it gently across the desk to Bond.  The red sans-serif letters, still damp, said: FOR YOUR EYES ONLY.”

This meeting with M occurs in the title story featured in this collection of adventures starring 007 James Bond. Five stories will take Bond to Paris, Vermont, “Bermuda”, Rome, and the Seychelles Islands for varied exploits uncovering a spy ring, murders, and more.

The collection begins with a typical Bond-esque sequence in “A View to the Kill.” Though the title lends its name to the 1985 Bond movie, starring Roger Moore, there is little in common with that film other than its setting in Paris.

Two riders on motorbike are traveling on a stretch of highway in France. The second rider “was dressed in the uniform of a dispatch-rider in the Royal Corps of Signals.” Much like the lead driver. “There was nothing in the [second] man or his equipment to suggest that he was not what he appeared to be, except a fully loaded Luger held by a clip to the top of the petrol tank.”

This spy kills the courier ahead of him and steals a “black leather dispatch-case off the corpse.”

Bond, “after a dismally failed assignment on the Austrio-Hungarian border”, is relaxing at Fouquet’s, one of his familiar haunts when in Paris. A black Peugeot 403 pulls up to the curb and a young woman steps out. Mary Ann Russell has been tasked to find Bond and bring him in for a new assignment: to discover who intercepted the courier.

In the second–and title–story, “For Your Eyes Only”, a middle-aged couple, Col. and Mrs. Havelock, are rudely interrupted at their plantation in Jamaica. A henchmen has been sent to buy the property and when the Havelocks refuse, they are ruthlessly gunned down.

Conflicted, M summons Bond to his office. M knew the Havelocks and fears he’d be biased in decided what should be done about their murder. Intelligence gathered pins the crime on von Hammerstein, an ex-Nazi who fled to Cuba and then to a secluded Vermont estate.

Bond’s mission will be one of assassination, but complications arise when he encounters the Havelocks daughter on a vendetta to take out von Hammerstein.

The third story, “Quantam of Solace”, is quite a departure. At a quiet dinner gathering at the home of the Governor of the Bahamas, Bond remarks, “I’ve always thought that if I ever married I would marry an air hostess.”

Later, when the Governor and Bond are alone, Bond earlier comment stirs the Governor’s memory. Bond considers the man “a routine type” but one who “would know about the checkerboard of small-power politics, the scandalous side of life in small communities abroad, the secrets of people that lie in the files of Government Houses round the world.”

Indeed, the man recounts a story from his time in Bermuda. A tragic tale of an ambassadorial worker who married an air hostess and the cruelty to one another that only a married couple could achieve.

“I’ve invented a rather high-sounding title for this basic factor in human relations. I have called it the Law of the Quantum of Solace,” the governor states. If this quantum reaches zero, “you’ve got to get away to save yourself.”

The story ends with a surprising twist.

“In this pizness is much risico,” says Bond’s contact in the fourth story, “Risico.”

“The two men sat back comfortably, each one satisfied that he had to do with a man in the same league. This was rare in “the Game.” Kristatos is informing Bond about a heroin drug ring. He fingers another man in the restaurant where he is meeting with Bond. However, the identified man in question is already on to them.

Enrico Colombo sends his moll, a beautiful blond—and in a Bond tale aren’t they all!—to set up a meeting with 007 on a secluded stretch of beach along the Bagni Alberoni, facing the Adriatic, outside Venice.

Three men in dark clothes approach, and Bond sprints along the beach hoping to evade them. “It was a question of who was in better training.”

“Bond’s shirt was already soaked and his feet were beginning to hurt. He had run perhaps a mile. How much farther to safety?”

Unfortunately, Bond is cornered and taken abroad Colombo’s yacht. He awaken from being knocked out to learn the tables have turned in more ways than one.

In the final story, “The Hildebrand Rarity”, the reader will be presented with a murder mystery. A truly odious man is on the hunt for a rare breed of fish. He invites Bond, vacationing in the Seychelles, and Fidèle Barbey, a local whose family “own nearly everything in the Seychelles”, aboard his yacht to hunt down this prize. Also on board is the fifth Mrs. Krest, a young, too submissive wife.

Milton Krest antagonizes Fidèle and insults the hot-blooded young man’s honor. At night in the confines of his cabin, he beats his wife with a vicious stingray whip. Having ruthlessly poisoned a section of reef to obtain his prize, Krest celebrates and gets drunk.

That night, Krest is murdered and Bond discovers the crime. The question is which one of them did it? And what will Bond do?

These five stories were quite entertaining. Each in their own way. The first two aren’t quite as engaging as the last two, and the middle story, “Quantum of Solace”, is quite a different pace altogether. They are all firmly set in the era of their writing.

All five young women Bond encounters in the stories are blond and beautiful. Though there is the obvious feel that they are objectified and treated as the weaker sex, all five of these women are remarkably capable and stronger-willed than they appear. Judy Havelock in “For Your Eyes Only” and–depending on your reading of the story–Mrs. Krest in “The Hildebrand Rarity” are particularly capable. The focus, though, is very much on the men of the story and Bond in particular.

It’s difficult to pin down a description/picture of Bond in these stories. A few details emerge… he’s young, athletically trim, has blue-gray eyes, about six feet tall, and he enjoys his cocktails. He’s protective of women and a guy’s guy. None of the actors who’ve portrayed Bond seem to suit the image of him I’ve gleaned from reading these stories.

And as for the films, some elements of “For Your Eyes Only” and “Risico” were incorporated into the 1981 feature, For Your Eyes Only. And 1989’s License to Kill uses some details from “The Hildebrand Rarity.”

For Your Eyes Only was first published in April 1960.  It was the first story collection, and the eighth Bond book.