Home › Mystery › Josephine Tey’s To Love and Be Wise

Josephine Tey’s To Love and Be Wise

Tey’s 3rd Inspector Alan Grant has to be one of the most ingenious mysteries ever written, and it begins with a good-looking young man arriving at a party… 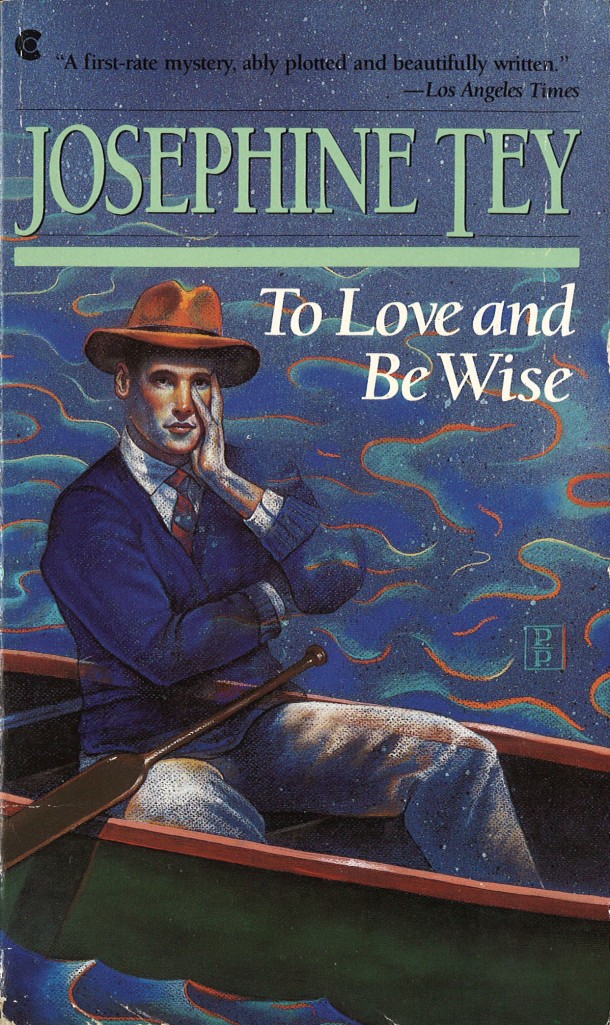 “Just inside the door, baffled apparently by the solid wall of talking and drinking humanity, was a young man, looking lost. He still had his hat in his hand, and had therefore just arrived.

When Grant addresses him, the young man drawled, “I’ve forgotten my megaphone.”

“Grant glanced at him again, approvingly. He was a very good-looking young man indeed, now that he took notice. Too blond to be entirely English. Norwegian, perhaps? Or American.”

Grant introduces the young man to author Lavinia Finch. The young man, Leslie Searle, is looking for her. “I’m over from the States on holiday and I wanted to meet Walter because Cooney Wiggin was a friend of mine too.”

Walter Whitmore is Lavinia’s nephew and a radio personality in England. Walter had been saved from actress Marguerite Merriam and was settling down to marry the more ordinary Liz. Walter isn’t at the party, but Lavinia invites the young man to Trimmings, her home in Salcott St. Mary, an English village which is also an artists’ retreat.

Grant, having done his part in making introductions forgets “all about Leslie Searle until the day when he was sent down to Salcott St. Mary to search for the young man’s body.”

It may be too strong to say that Searle insinuates himself into the household. Rather he becomes a fixture.  “There had never been any guest at Trimmings who had merged himself with the household as Searle did.  Nor had there ever been anyone who intensified the life of each one of them to the same extent.”

Later, Lavinia–with a writer’s insight–remarks, “He is–uncanny … There is no other word.  You wait and watch for the next thing he is going to do, as if it were–as if it were a sign, or a portent or a revelation, or something.” … “If he were to disappear tonight, and someone told me that he was just a beautiful demon and not a human being at all, I would believe them.”

Each of the characters in Salcott St. Mary come to like or dislike Searle in their own peculiar way.  But it’s Searle insertion between Walter and his fiance Liz that becomes a sticking point.  After a joint expedition by canoe along the river Rushmere, Walter and Searle are seen at the local pub.  Walter leaves in a huff, and Searle casually remarks, “if he had stayed any longer he was liable to throttle me.”  Moments later, Searle leaves as well…

“And that was the last that anyone in Salcott St. Mary ever saw of Leslie Searle.”

Inspector Grant will be assigned the case, but just what kind of case is it?

If someone murdered Searle, then where is the body?  Or is it possible that Searle merely disappeared?  But if so, then how could he have vanished?

A central clue to the whole mystery may just hinge on something that Grant finds missing among Searle’s meager belongings.  “What would fit into a space 10 inches, by 3 1/2 by 4?”

It seems Grant is stymied at every turn to resolve Searle’s fate.  The river is dragged twice, but only one of Searle’s shoes is found.  Grant suspects one likelihood, but can’t seem to prove it.  With time running out, Grant realizes that Searle’s estranged English cousin may hold the final clue to mystery.

The solution may just come as a shock. Its conceit likely wouldn’t work in today’s savvier, social media connected world.  But then again, just maybe, it could. Without giving away too much, the novel’s central mystery is based on perceptions and conventions.  Tey does a masterful job of giving us insight into the minds of her suspects while concealing clues that point in the proper direction.

To Love and Be Wise likely takes its title from the quote by Irish statesman Edmund Burke (1729-1797), “To tax and to please, like to love and be wise, is not given to men.”  It was originally published in 1950, one year prior to the work considered Tey’s best, The Daughter of Time.

If you have never read Tey, put her on your list.