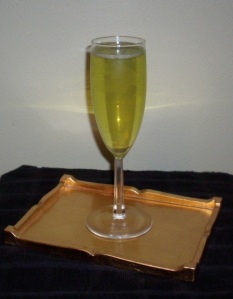 Death in the Afternoon cocktail

This Friday, take a risk and try Death in the Afternoon.

This week saw the anniversary of Ernest Hemingway’s birthday.  He was born on July 21, 1899.  A journalist, a writer, and an adventurer, Hemingway is credited with the creations of this cocktail.  In his own words, he advises, “Pour one jigger absinthe into a Champagne glass.  Add iced Champagne until it attains the proper opalescent milkiness.  Drink three to five of these slowly.”

A jigger is equivalent to an ounce and a half, but I’ve reduced that amount in the recipe below for a better balance.

The drink perhaps takes its name from Hemingway’s nonfiction book about bullfighting, Death in the Afternoon, which was published in 1932.  The recipe appeared three years later in a cocktail book that included various authors’ contributions.  Alternatively, the drink is also known as a Hemingway.

One might wonder where Hemingway got Absinthe for his cocktail.  The drink of 19th century artists and writers was banned in the United States and parts of Europe, including France, in 1915.  Pernod with its anise-flavor may be used as a substitute, but it’s unlikely that would suit Hemingway’s tastes.  Pastis would have been–and still is–a better substitute in this instance.  Fortunately, Absinthe is once again available.  And though its not quite the same as the original spirit, modern Absinthe makes for a fine apéritif.

What you’ll need:  Champagne and Absinthe

Pour an ounce of absinthe in a champagne glass and fill with chilled champagne.

How I like it:  Truly an ounce of absinthe goes a long way, and blends better with the champagne.  Also, the absinthe will taste much stronger immediately after pouring in the champagne so you may want the drink to breathe a bit before serving.

« The Old Man in the Corner
Writing Challenge 32 »