A Tale of Two Covers

Judging a book by its cover is inevitable, n’est pas?  We all do it in spite of our best efforts not to.  After all, an eye-catching cover will draw our attention to pick up that book from the shelf and read the blurb to find out what it’s about.  For an author, that’s half the battle right there.  Stand out from the crowd and entice readers. 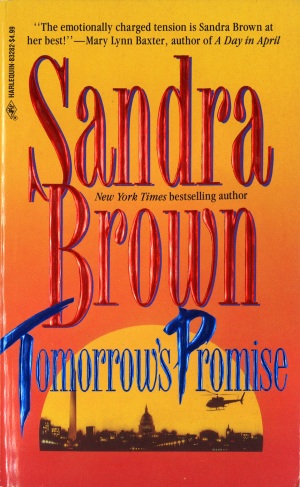 Now Sandra Brown is a best-selling author with name recognition, and the cover of her books may not exactly matter in garnering attention.  But consider, for a moment, the draw of these two covers for someone who hasn’t read Sandra Brown, who may or may not be considering picking up one of her books, or <gasp> isn’t familiar with the author’s name at all!

Of the two, I find myself more interested in and intrigued by the cover on the left. The United States Capitol Building and the glimpse of the Washington Monument behind it are immediately recognizable.  The tropical scene, framed by a fan, with a military helicopter flying aloft is suggestive of the Vietnam War as a locale.  Altogether this blended imagery suits a story involving political social circles and policy with a connection to the Vietnam era.  Additionally, the question below the novel’s title indicates there is romance to be found within.

As for the cover on the right, we see a skyline of Washington, D.C.–again the Capitol and Washington Monument are featured–and a helicopter flying overhead.  The encasing half-circle is representative of the sun setting on the capital.  There’s nothing else to glean what the novel is about nor if there’s any connection to the Vietnam war.  In fact, this cover seems rather generic.

“A book cover’s paramount job is to communicate the book’s content and convey information concerning both what the book is about and what the book is like,” says Thom Barthelmess in “What Make a Good Book Cover?” from The Horn Book Magazine (March/April 2014).

Barthelmess goes on to say, “The front and back flaps have something to say, and experienced readers may find clues in a summary statement or author’s note.”

Let’s take a look at those back cover blurbs…

These blurbs are quite different.  The one on the left explicitly states who our heroine and hero are, their connection to the locales on the cover, and a major conflict.  The blurb on the right clearly states the heroine’s dilemma, but lacks any mentions of place or time.  And is the hero of the story meant to be Mark?  Again, my preference is the cover at left.

However, as Barthelmess states, “the text and graphics on the cover deliver the most immediate and indelible impression,” many potential readers may not pick up either book to read the back cover in order to make their decision of which book to read.

Sadly, most authors don’t have any input regarding their cover or branding.  A few may have this privilege but have no final say in the matter.  Perhaps this is for the best as authors may either lack the time or graphics knowledge to creating that winning cover.  Although in today’s ever-expanding market (print and digital, traditional and self-published), more and more authors should and really must consider branding.  (See my article on branding here.)

Now granted all this is subjective.  We’ve all seen covers we like and ones we don’t, and this is merely my opinion regarding these two specific covers for illustratively purposes.

Do you agree with my assessments?  Which cover or blurb do you prefer?  And what covers have been the best at attracting your interest?

The cover (at left) is from the Mira mass market paperback issued circa 2000.

The cover (at right) is from the Harlequin mass market paperback reprint in June 1993.

The novel was originally published in 1983.  Considering comparing these two to other available editions.