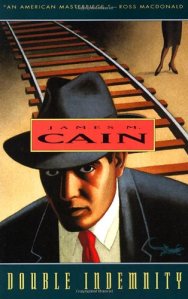 “I drove out to Glendale to put three new truck drivers on a brewery company bond, and then I remembered this renewal over in Hollywoodland.  I decided to run over there.  That was how I came to this House of Death, that you’ve been reading about in the papers.”

It’s that familiar story again.  Man meets married woman and together they decide to kill her husband.  This time the tale is told by insurance agent Walter Huff.

As with The Postman Always Rings Twice (read review here)–with which this story has much in common–it is difficult to review James M. Cain’s Double Indemnity without mentioning aspects of the plot.  For those who don’t mind such spoilers, read on.  Others may want to read the story before proceeding.

And it is worth the read.  Double Indemnity is perhaps better known than it’s predecessor.  It was serialized in Liberty magazine in 1935, a year after Cain’s The Postman Always Rings Twice, but was the first to be filmed.  Double Indemnity was filmed in 1944 with Fred MacMurray as Walter, Barbara Stanwyck as Phyllis, and Edward G. Robinson as Keyes.  The film was nominated for seven Academy Awards, and it’s success is a large part of the reason this story is so well-known.

Like Frank in The Postman, Walter falls for Phyllis Nirdlinger.  After his first encounter with her, he says, “I got in the car bawling myself out for being a fool just because a woman had given me one sidelong look.”

In fact, a curious thing seems to be at play here in Cain’s novel.  Unlike the film version, it’s possible that Walter is more inclined to commit murder, not just because of Phyllis, but because he knows how the insurance business works and he wants to bilk them.  The idea seems to thrill him and serves as a means to prove how clever he thinks he is.

While discussing how to off Phyllis’ husband, Walter states, “I didn’t spend all this time in this business for nothing, did I?”  And later, “It’s the biggest gambling wheel in the world.”  “They’ve got their spotters out there, they know every crooked trick there is, and if you want to beat them you had beter be good.”  “I’m a croupier in that game.  I know all their tricks, I lie awake nights thinking up tricks, so I’ll be ready for them when they come at me.  And then one night I think up a trick, and get to thinking I could crook the wheel myself if I could only put a plant out ther to put down my bet.”

Indeed, Walter may have found in Phyllis a pretty convenience.  A chance to try his trick and maybe settle down with a lovely lady.  Only Walter has no idea just how conniving and deadly Phyllis truly is.

His more immediate concern is Keyes, the head of the Claims Department at the insurance agency he works for.  Walter describes Keyes as “he’s big and fat and peevish, and on top of that he’s a theorist, and it makes your head ache to be around him, but he’s the best claim man on the Coast, and he was the one I was afraid of.”

In Keyes, we have a detective of sorts.  When Mr. Norton, the head of the company, proposes Mr. Nirdlinger committed suicide, it’s Keyes who refutes him.  “There’s not one case here out of all these millions of cases [of suicide] of a leap from the rear end of a moving train.”  Keyes believes it was murder.  “It’s a slick job, but it’s no accident, and it’s no suicide.”

Keyes even hits on the notion that Nirdlinger was never on the train and that someone else impersonated him.

The fact that Walter is present at this discussions of the case helps him escape detection for a time.  He’s able to communicate briefly with Phyllis that they both need to keep a low profile.  But you see, there are complications.  Phyllis was Nirdlinger’s second wife and is stepmother to Lola.  Lola has secretly been dating a young man, Beniamino Sachetti, and she visits Walter.  She tells him how her mother died from pneumonia at a remote lake house and that Phyllis was there.  She suspects Phyllis had something to do with both her parents’ deaths.  And Sachetti, too, seems to have some past connection with Phyllis.

It’s not long before Walter comes to a realization.  “I don’t know when I decided to kill Phyllis.  It seemed to me that ever since that night, somewhere in the back of my head I had known I would have to kill her, for what she knew about me, and because the world isn’t big enough for two people once they’ve got something like that on each other.”

Phyllis may have been thinking along the same lines.  There’s a creepy, recurrent theme regarding her and the personification of Death.  “I think of myself as Death, sometimes.  In a scarlet shroud, floating through the night.  I’m so beautiful, then.  And sad.  And hungry to make the whole world happy, by taking them out where I am, into the night, away from all trouble, all unhappiness…”  Lola mentions seeing Phyllis dress up in red shroud and “with her face all smeared up with white powder and red lipstick, with a dagger in her hand…”  And a final occurrence appears at the end of the book.

This ending, however,  is odd.  Phyllis dresses up as Death as Walter finishes writing his account of events.  Keyes has seemingly let them escape, but there’s really nowhere to go, except for a certain watery grave.  The ending makes you think, “What?!”  It’s strange, and certainly differs from the film ending.  It’s suitable, but vague.

Both The Postman Always Rings Twice and Double Indemnity were based, in part, on the famous 1927 trial of Ruth Brown Snyder and her lover, Henry Judd Gray, who conspired to murder her husband in Queens, New York.  Cain, a journalist, had covered the trial.

Both mysteries are must-reads for any fan of the genre.  Of the two, Double Indemnity–apart from the ending–is the stronger of the two stories.  The writing, plot, and pacing are tighter.  And the secondary characters add greatly to the story and intrigue.