Home › Mystery › To Catch a Cat

To Catch a Cat 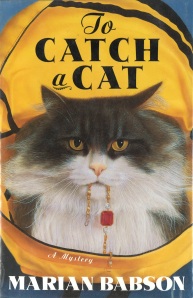 “Something told him he would never feel safe again.”

Eleven year-old Robin falls prey to peer pressure.  He wants to fit in at school and with the popular kids so he agrees to steal a neighbor’s cat.  In the process, he is witness to a murder.  He escapes with the cat, Leif Erickson, but fears the murderer will hunt him down.

Robin is very right to worry.  Nils Nordling has just killed his wife in a rage.  “He never imagined that there might be a witness.”  Nordling is plagued by a “red haze”, bouts of “wild uncontrollable rage”, which lead to his brutally slaying his wife, Ingrid.  He would have killed the cat, too, but for Robin’s timely “rescue.”

Normally, Robin might not have to worry about being found out.  A cat is much like any other, right?  Except Leif Erickson is a famous show cat, having won numerous prizes, and is likely to be recognized.  More so when “missing cat” posters are plastered all over town.  Not that these notices are posted by Nordling.  He doesn’t want the cat found.  He’s hoping to secretly track down the cat and find the witness so he can silence them both.

So who put up the posters all over town?  That would be Edith, a friend of Ingrid’s.  Edith’s husband invited Nordling to come stay with them while the widower “grieves.”  Edith had better watch out for Nordling’s rages.  He doesn’t take too kindly to her interfering or later, her suspicions …

To Catch a Cat reads like a cat and mouse game between Robin and Nordling, though neither are privy to the other’s actions.  Robin spends much of the book trying to keep the cat a secret from his aunt and her boyfriend; his recently remarried mother has left him in their custody.  Nordling, meanwhile, stalks about trying to keep his rage in check.

The story alternates between the two characters and builds up to the inevitable conclusion.  When radio shock jock Josh, the boyfriend of Robin’s aunt, snags an interview with Nordling, we anticipate a climatic scene–replete with madcap hilarity–as Nordling is uncovered as the killer he is.  Sadly, the “reveal” is all too brief.

Still, To Catch a Cat is an enjoyable story in the vein of classic traditional mysteries.  There’s nothing to solve here, but that’s not the focus or point of the story.  It’s more about experiencing the story as it unfolds and being entertained.  This very British tale was previously released under the title, A Tealeaf in the Mouse.  Though published in 2000, its setting seems reflective of an era decades earlier.

Cat lovers will no doubt enjoy this story, but so too will readers of cozies and those who prefer strong character-driven pieces.  The third person narration is the perfect vehicle for such introspective characters.