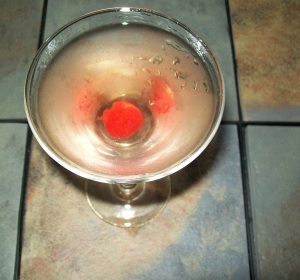 It’s Alive!  Well, maybe not … but this Friday Cocktail might just revive you.  Try the Frankenjack!

Dating back to the Prohibition Era, this cocktail is very much like the amalgamation of two drinks.  The ingredients of a classic martini are given a boost of subtle fruit flavors with the addition of apricot brandy and cointreau.  Add a cherry and you may well have created your own “Frankenstein” aperitif.

It’s likely the original cocktail used something more akin to today’s apricot eau-de-vie.  See article here.  Apricot Brandy, however, has been commonly used since at least the early 1960s.

In a shaker over cracked ice, pour in 1 ounce of gin, 3/4 ounces of vermouth, 1/2 ounce of apricot brandy, and a tablespoon or two of cointreau (or triple sec).  Shake and then strain into a chilled cocktail glass over a maraschino cherry.

How I like it:  Apricot Brandy is best, but try a Cherry Brandy as an alternative.  It matches the garnish better.  Also, I tend to add more cointreau/triple sec than what’s called for, using 1/2 ounce instead of tablespoons.  Martini drinkers might consider using proportions for how they best like a classic martini before adding the brandy and cointreau.