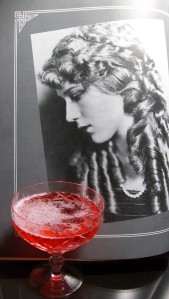 Mary Pickford,
the drink & the actress

Toast a Legend with this Friday’s cocktail, the Mary Pickford!

During the Silent Film era, petit blond Mary Pickford (1892 – 1979) was the reigning queen and one of Hollywood’s first stars.  “‘She was not just the first screen idol’, said B P Schulberg, an executive and producer at Paramount, ‘She had become a national institution–the symbol of rags to riches, of the good little girl overcoming evil.'” *  She starred in such films as Cinderella (1914), Poor Little Rich Girl (1917), Rebecca of Sunnybrook Farm (1917), Pollyanna (1920), and Coquette (1929), for which she won an Oscar.  Her film career spanned from 1909 to 1933, first in shorts and then in feature films.

This drink, obviously named for the star, appeared on the scene sometime during Prohibition, in the 1920s, likely invented in Havana by bartender, Eddie Woelke.  See here.  This sweet concoction is delightful with its flavor of cherry and pineapple, making it an excellent summertime drink.

In a shaker over cracked ice pour in 1 ounce of rum, 1 ounce of pineapple juice, and 1/4 ounce each of grenadine and maraschino.  Shake and then strain into a fancy glass of choice.  Garnish with a maraschino cherry.

How I like it:  Some recipes call for a teaspoon or even just a dash of the grenadine and maraschino, but I think I prefer the above version.  Though maraschino liqueur is what the recipe calls for, I just used maraschino juice, which is more readily available.  Most recipes also call for light rum, but I used Bacardi Dark Rum.  Though really, any rum would suffice.

*Quote from the book, Silent Movies, by Neil Sinyard.  1990.  An excellent compendium volume about the era of silent films.