Death at La Fenice I 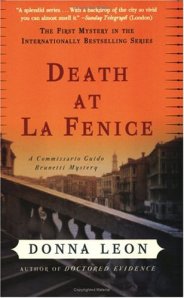 Normally I don’t like to review a book before I’ve finished reading it, but in the few chapters I’ve read so far, Death at La Fenice has thoroughly captured my attention.  I don’t yet know how strongly the mystery aspect will play out, but the writing and characterizations are excellent.

This first Guido Brunetti police procedural is set in Venice, a city I’ve been fortunate to visit.  The novel begins with a disturbance at the Venetian opera house, La Fenice.  The artistic director calls for a doctor.  It seems the world renowned conductor, Maestro Helmut Wellauer, has been poisoned in his dressing room during the intermission between Acts II and III.  Dr. Barbara Zorzi reluctantly leaves her seat in the orchestra and smells the bitter almond scent of cyanide.  In just two short chapters, the Dottoressa shined as a strong female character that lived, breathed, and smoked in the confines of this mystery’s beginning.

Then there’s the picture perfect language.  At the start of Chapter Four, Venice is described as “Once the capital of dissipations of a continent, Venice had become a sleepy provincial town that virtually ceased to exist after nine or ten at night.  During the summer months, she could remember her courtesan past and sparkle, as long as the tourists paid and the good weather held, but in the winter, she became a tired old crone, eager to crawl early to bed, leaving her deserted streets to cats and memories of the past.”  A few short sentences later…”Like many women of a certain age, the city needed the help of deceptive light to recapture her vanished beauty…The fogs that were common in these winter days could transform people and objects, even turn long-haired teenagers, hanging around a street corner and sharing a cigarette, into mysterious phantoms from the past.”

It’s been a long time since I’ve read such an evocative and descriptive–in so few words–portrait of a novel’s setting as this.  Perhaps it helps that I have some familiarity with Venice, but I’ve read other books set in places I’ve been that seemed flat in describing them.

I look forward to reading the rest of this gem of a story with such promise.  And naturally, I will be sure to give it my full review once I’ve done so.