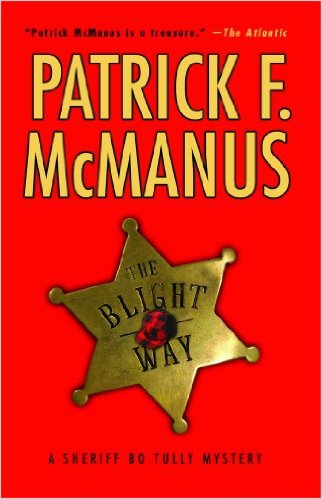 Bo Tully, the Sheriff of Blight County, Idaho, has his own way of doing things, thus the Blight Way.

“That’s because Blight County is thirty years back in time, and Famine is at least fifty years back,” says Bo’s father, Pap. This quote is so suitable in describing the fictitious county—and the very small “town” locale of the crime scene—while giving readers a sense of the real Idaho rural setting.

There’s a sense of the ol’ Wild West that permeates the story. Everyone knows everyone in a small town. Lawlessness is rampant in the boondocks, and the Sheriff fancies himself a ladies man. He even reads Danielle Steel, giving him the idea to try a “warm look” on one of his dates, though he fails spectacularly to get that right.

So what’s the crime?

A man is found dead on the Scragg cattle ranch. The Scraggs, particularly the ne’er-do-well sons, are like modern day cattle thieves, who may have swiped a bull from the adjacent Littlefield ranch. Batim Scragg notified Bo Tully about the body. “The dead man was wearing a dark-blue pin-stripe suit, a shiny black shoe on one foot and only a black sock on the other foot. He looked to be about forty-five or fifty, but in good shape.” Except for the “two tiny black holes in the back of his jacket.”

The man had been chased through woods and fields, and Bo has “Dave the Indian” track the trail back to another crime scene, a bullet-riddle Jeep with blood, bodies, and tracks. It seems three guys, the victims, came up from Los Angeles to meet someone in Blight County. The question is who and why.

The case gets more complicated when Bo goes to meet Vern Littlefield. “Not much happens in this part of Blight County he doesn’t know about.” Problem is, Littlefield’s pretty young wife, Cindy, tells Bo that her husband has gone off elk hunting. And there just happens to be two guys, Robert Mitchell and Harry Kincaid, hanging out at the ranch. Ostensibly they work for Littlefield, but Bo quickly suspects more is going on and that Littlefield might not be hunting anything from six feet under.

Bo’s style of sleuthing—and certainly the execution of his duties—may not be entirely by the book, but hey, it’s the Blight way.

The Blight Way introduces readers to some quirky characters and a smart sheriff. A lot of dialogue and some situations make for some hearty laugh out loud moments. Bo’ father Pap absolutely steals scenes with gumption.

The humor and style of the book may suit fans of Carl Hiaasen, Elmore Leonard, and Stephen Dobyns, but with less focus on violence and a cozier feel.