Home › Mystery › By Its Cover: The Bones of Paris

By Its Cover: The Bones of Paris 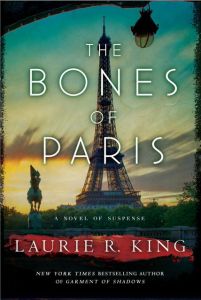 Do some covers attract attention because they feature someplace we’ve been or wish to go?  When traveling do you bring a book set in the place where you’ll be?

Two things stand out on this cover: the Eiffel Tower and off to the left, an equestrian statue.  It’s not the most stellar cover featuring a Parisian setting.  Yet this scene of the Eiffel Tower at dusk still attracts notice.  At least for me.

A little knowledge and familiarity with Paris helps here.  The title recalls to mind the underground ossuaries housed in the Catacombs of Paris, a macabre tourist attraction for visitors to the city.  Created in the late 1700s, these passages house the bones of an estimated six million souls.

I can’t help but wonder if the catacombs figure into this story.

The Bones of Paris is a departure from author King’s usual Mary Russell / Sherlock Holmes mysteries.  Set during the Jazz Age of the 1920s, this is the second book to feature Harris Stuyvesant and Bennett Grey.  They’ll navigate the expatriate community of artists and writers living in the City of Light to solve a disappearance.

American private investigator Harris Stuyvesant is hired to find a missing woman.  He’ll follow her trail “through the expatriate community of artists and writers” and “crosses paths with many of its famous–and infamous–inhabitants, from Ernest Hemingway to the Surrealist photographer Man Ray.”  The trail will lead Stuyvesant to the Theatre du Grand-Guignol in Montmartre where “murder, insanity, and sexual perversion are all staged to shocking effect.”

King is known for crafting richly-detailed historical novels with fascinating characters, and this entry looks particularly interesting.  Though some may want to begin with the series’ first entry, Touchstone, published in 2007.

Its familiarity among American readers makes the French capital a choice locale.  Along with London, Paris stands as one of the best–and most used–European cities in which to set a murder mystery, historical or contemporary.

What locales do you choose as your reading destinations?