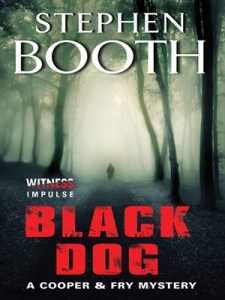 The title of Stephen Booth’s debut mystery comes from an expression in “some country places” where a person suffering melancholy is described as having “the black dog on his back.”  For much of the novel, several characters could be said to have the black dog weighing them down.

The story begins ominously.  A granddaughter tells her grandfather, Harry Dickinson, “It’s no good walking away, you know.  You’ll have to face it in the end.  You can’t run away from things forever.”  But to what could she be referring?

Soon after, we learn the police are searching for a missing girl.  Back from leave, Ben Cooper is part of the line searching for Laura Vernon, the daughter of a wealthy family seemingly disliked by town residents.  Later the Vernons will be referred to as “comers-in”, meaning they’re a family you know of but don’t really know.

When we meet the girl’s parents, something seems off kilter.  Charlotte and Graham discuss their daughter’s disappearance in Chapter Two, but there is a disconnect between these two.  Is it because of their daughter or something more?  They seem more concerned about entertaining guests.  Perhaps they think she’s merely run off with a local boy, Lee Sharrett.

Later, Harry Dickinson–along with his dog–finds a trainer belonging to the missing girl.  Cooper is called to take a look and finds the remains.  It’s a gruesome discovery.  And it’s here where the story begins to take unexpected turns.

In many British police procedurals–and some American ones for that matter–when there are a male and female officer paired together to solve a case, it seems inevitable that they will end up as romantic interests and fall into the “will they or won’t they?” trope.

“Fry had already heard Ben Cooper’s name several times during her first week in Edendale.  Apparently he was some paragon of all the virtues who knew everything.”  This is not the start of will she fall for him.  DC Diane Fry has transferred to the Edendale E Division Police force.  “Affairs with colleagues were not on her agenda.”  But in her ambition, she has set her sights on Ben and how to dethrone him from being a shoo-in for promotion to sergeant.

Ben is slow to realize how systematic Diane is in knocking him down off that pedestal.  It’s not until he offers to bring her to his dojo for a sparring match that he learns she neglected to tell him of her black belt status and planned to trounce him in front of his friends.  In anger, he goes off on a bender.  She softens a bit to help him out of tight spot.  And amazingly, they manage to pair up and trust each other long enough to investigate the murder!

Diane and Ben are very real characters with complicated lives.  He’s dealing with tragic personal issues, and there are hints that Diane has her own secrets.  It’s mentioned that she had to leave her previous job due to “circumstances.”  We learn more about her family issues in subsequent books.

As for the girl’s mysterious murder, the plot slowly unfolds, building to an unexpected conclusion.

It’s clear early on that Harry has something to do with the murder.  He knows something more than he’s willing to tell.  Did he do it himself or is he covering up for someone else.  He and two other aged men, Sam and Wilford, often meet at a local pub.  And we witness them discussing real life crime versus those seen on TV.  But why do they seem so concerned about spending life in prison?

Of course the most obvious seeming suspect is that local boy, Lee Sharrett.  He goes into hiding soon after the body is found.  It’s known that he worked as a gardener for the Vernons, but was let go.  The victim apparently cost him his job because she wanted a relationship with him he wasn’t willing to reciprocate.

Then there’s that statement from the beginning pages made by Harry’s granddaughter, Helen.  She later says, “No, we’ve never talked about anything important, have we?  Not ever, in this family…”  What is this family’s connection to the Vernons?  Helen’s father works for Mr. Vernon, but there’s a suggestion of something more.

With so much going on in this story, the narrative pulls us in and keeps us wondering until the last few pages.  How will it all come together?  What will happen?  Why did it happen?  And even, how will the series progress beyond this debut for Ben Cooper and Diane Fry?”

Definitely recommended for fans of British police procedurals.  Keep in mind that some libraries and bookstores may consider the series more suspense than mystery, and thus the books may be more likely found in fiction rather than the genre category.

Please note: this review is based on the ebook version.