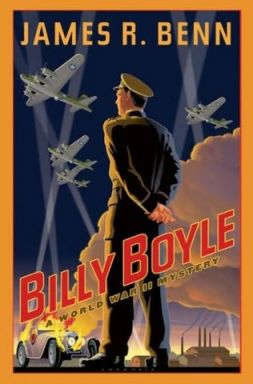 In the opening pages, Lieutenant William Boyle has finished typing.  “I pulled the sheets out of the typewriter, separated out the carbon paper, and made two neat stacks.  My offical report.”  What follows is his first adventure as special investigator for his “uncle”, Dwight D. Eisenhower.

Billy Boyle “made detective three days before Pearl Harbor.”  Not wanting him in harm’s way, his family put the fix in (not for the first time) and used their connection to get him assigned to Uncle Ike.  Billy’s mum is second cousin to Mamie Doud, Ike’s wife.  The family thought it meant Billy would be working in Washington, D.C., but General Eisenhower is heading up the European Theater of Operation in London, England.

In June 1942, Billy finds himself on a plane headed for England.  At first he’s not to keen on helping out the Brits; he’s from an Irish family in South Boston.  “The English had their time in the sun when they conquered Ireland and ran it like their private preserve,” he tells us.  But after seeing “piles of rubble where apartment houses and office buildings used to be” and meeting British citizens, grateful for the Americans’ arrival, he soon realizes they’re all on the same side in this war.

Upon meeting his uncle, Ike makes it clear he didn’t take on Billy just beacuse they’re family.  “Sooner or later, I’m going to need someone who can handle potentially delicate investigations.”  Indeed, soon after, Billy’s put under Major Harding’s command and sent off to Beardsley Hall to ferret out a spy.

In April 1940, Germany invaded Norway.  King Haakon VII of Norway and the Norwegian government fled to England.  The Norwegians established their government-in-exile first at Bowdown House and then Foliejon Park.  In Billy Boyle, these residences becomes Beardsley Hall.

Billy is accompanied to the Hall by Harding; Harding’s second officer, Daphne Seaton; and by Lieutenant Piotr Augustus ‘Kaz’ Kazimierz, a Polish baron.  Harding along with his British counterpart, Major Cosgrove, explain to Billy and the others that plans are being made to liberate Norway and why it’s vital that the spy be uncovered.

Harding soon assigns Kaz to Billy, saying “Be certain he doesn’t cause an international incident.”  After all, Billy had just been asking the King of Norway and his advisors questions about the Norwegian treasury, a fortune in gold, being smuggled out of Norway during the German invasion.

Soon after, Billy is nearly killed by a live round during a war exercise.  Had his questions stirred up something?  Or was the bullet meant for one of the king’s advisors, Knut Birkeland, who later turns up dead among the geraniums?

Birkeland’s death was made to look like a suicide, but Billy suspects otherwise, especially since the man’s bedroom was locked and the key is no where to be found.  Did the spy turn murderer or are there two culprits to be found?

Harding and Cosgrove discover that someone has rifled through the plans for invasion.  The suggestion is this break in and Birkeland’s death happened simultaneously.  More complications quickly arise as the war demands action and potential witnesses are on the move.  Billy will need Daphne’s and Kaz’s help to solve the murder and uncover the spy before its too late.

The historical tone of this mystery is set in the first chapter as Billy arrives in London and sees the effects of the Blitz up close.  The fine details in the narrative that follow continue to build upon and steep readers in the period and atmosphere of wartime England.

“One generation gets in, another gets pulled out.  Like war was a tide that washed over us, leaving some on the high ground and dragging others out to sea,” reflects Billy, thinking about the two world wars.

His dad and uncle served in the first World War and became cops in its aftermath.  Naturally, Billy followed in their footsteps.  He had a little help making detective and tends to doubt his abilities early on.  He may not be book smart, but he’s an introspective character with street smarts.

The pace of the story may seem to get bogged down at one point when Daphne takes Billy and Kaz to her family home, Seaton Hall.  There, Billy meets Daphne’s sister, Diana, and there’s an instant attraction.  This seeming diversion sets up for future adventures and helps Billy realize something important about the murder.

The final act is especially likely to rivet readers.  Billy learns too late that the killer has slipped through everyone’s grasp, and he’s willing to defy orders to enact justice.