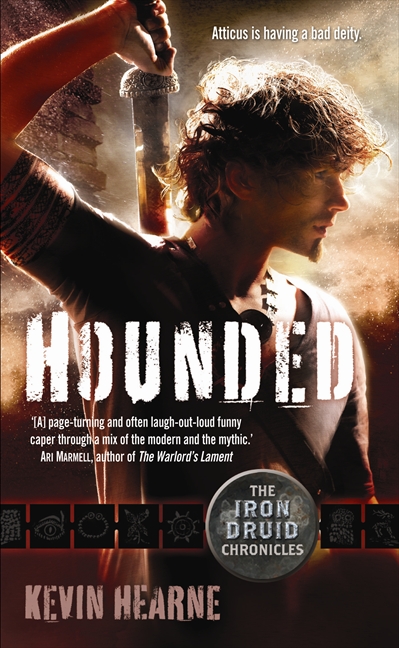 Centuries ago, the druid Siodhachan Ó Suileabháin fled a battle between gods and carried away the powerful and dangerous sword, Fragarach, capable of killing the gods themselves.  He angered the Celtic god of love, Aenghus Óg, who longs to take back the sword and kill the druid who took it.

In Tempe, Arizona, a handsome, seemingly young Irish lad runs an occult shop near the university.  Atticus O’Sullivan looks twenty-one years old, but he is the centuries old druid Siodhachan Ó Suileabháin lying low in the desert clime far removed from his homeland and the gods seeking him.

Of his looks, Atticus tells us, “People see my curly red hair, and long goatee, they suspect that I play soccer and drink lots of Guinness.  If I’m going sleeveless and they see the tattoos all up and down my right arm, they assume I’m in a rock band and smoke lots of weed.”  His efforts to ‘blend in’ and hide from his enemies serve him well for a time, but his conceit in retaining the O’Sullivan name—Ó Suileabháin is the Celtic form—and the internet bring trouble to his door.

His one ally, perhaps, is the Morrigan, Celtic Chooser of the Slain and goddess of war.  It is she who brings Atticus the warning—after he’s been attacked by five fae thugs—that his whereabouts have been discovered.  Atticus thinks it’s “unlikely Aenghus Óg would leave Tír na nÓg to hunt me down himself.  He is far more likely to employ surrogates.”  Atticus, though, is tried of running.  He decides its time for the centuries long enmity to end one way or another.

Before long, Atticus is visited by another goddess.  Flidais, goddess of the hunt, brings mixed tidings.  She and Atticus go hunting together, but then she causes Atticus’ Irish wolfhound, Oberon, to kill a human—a park ranger under Aenghus Óg’s influence.  Atticus explains to the goddess, “His death will cause me and my hound much trouble.”  Indeed, a police officer—also under Aenghus Óg’s influence—soon comes to Atticus looking for an Irish wolfhound.  Fortunately, Atticus has obscured Oberon with a spell.  The hound is very dear to him as they can telepathically communicate.

More complications arise when a local witch seeks Atticus’ help in deterring an unwanted lover.  Emilia is a member of a coven of Polish witches led by Radomila.  Atticus has a distrust of witches, but he had done a favor for Radomila and considers himself on good terms with the Tempe coven.  Atticus agrees to help Emilia but quickly finds her less than charming.

And then there’s Granuaile, “the redheaded siren behind Rúla Búla’s bar.”  Atticus is intrigued by her.  “She was a mystery to me, but a beautiful one at that.”  He senses she is something other than human but can’t determine what.  Granuaile does hold a secret and will ask a favor of Atticus.  One that may help or hinder him.

Hearne’s Iron Druid Chronicles, of which Hounded is the first book, primarily focuses on the pantheon of Celtic gods but allows for the pantheons of other mythologies to become part of the action.  Thor, the Norse god of thunder, is mentioned in Hounded and is apparently a real douchebag.  There are also references to the Native American trickster Coyote.

Atticus and his faithful hound, Oberon, are likeable characters and engaging heroes, and the mythological elements remind me of Neil Gaiman’s American Gods.  I highly recommended Hearne’s series for readers of urban paranormal fantasies.  I know I eagerly look forward to fitting the rest of the books into my reading schedule.

By the way, since Atticus is technically Irish, one might consider the following drinking game.  As a druid, Atticus’ powers are strengthened by a connection to the earth so he often wears sandals, kicking them off when he needs to draw power from nature.  Take a shot each time Atticus goes barefoot.  Just be sure you don’t have to drive anywhere!  There must be at least a dozen instances in Hounded where Atticus shucks his shoes.

Just be sure to drink responsibly!