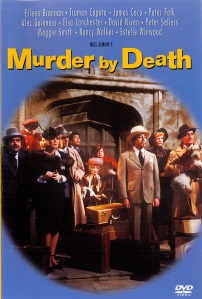 What would happen if Hercule Poirot, Miss Marple, Sam Spade, Nick and Nora Charles, and Charlie Chan teamed up to solve a mystery?  Well, no one really knows, but it might have been something like Neil Simon’s Murder by Death (1976).  An eccentric millionaire has invited some of the world’s greatest detectives to his isolated mansion to solve a murder.  With a million dollars at stake, will they be able to solve the mystery?  Will they survive the night and each other?

On a foggy night they come.  The first to arrive is Sidney Wang (Peter Sellers) and his number three son.  Dick and Dora Charleston (David Niven and Maggie Smith) along with their dog.  Then Milo Perrier (James Coco) and his chauffeur followed by Sam Diamond (Peter Falk) and his secretary, Tess (Eileen Brennan).  As each arrive, someone tries to kill them at the front door!  As they anxiously await the arrival of Miss Jessica Marbles (Elsa Lancaster), the deductive observations come fast and furious.

They’re all waited upon by the butler, who’s blind, and the cook, who can’t speak or hear.  Upon meeting the blind butler, Dora tells her husband, “Don’t let him park the car, Dickie.”

At dinner, Lionel Twain (Truman Capote) makes his grand entrance, and the guests find themselves promptly locked inside.  Twain announces that he is the world’s greatest detective, and he’ll prove it when a murder takes place at midnight.  Shenanigans lampooning the conventional, and not so conventional, staples of murder mysteries ensue to hilarious results.

Not wanting to give away too much of the plot or ending, all I’ll say is that the solutions are ridiculously implausible, but that’s all a part of this vastly entertaining movie.

The verbal exchanges and one liners in Murder by Death are priceless, and demand multiple viewings.   Example, when asking his secretary what she’s found out about their mysterious host, Sam Diamond asks, “Where’d you dig up all that stuff?”  Her resposne: “Oh, I wrote to Twain and asked him.”

The DVD edition contains some interesting liner notes about casting.  Originally a character patterned after Agatha Christie was to be played by Katharine Hepburn.  Orson Welles was approached to play Perrier, and Myrna Loy, the original Nora Charles, was approached to play Dora Charleston.  Welles and Loy turned down their roles, which were then recast with James Coco and Maggie Smith.  The character of Dame Abigail Christian was dropped and changed to include Jessica Marbles.

Personally, James Coco’s “Poirot” is one of the strongest impersonations alonside Peter Falk as “Sam Spade.”  Niven and Smith were a perfect pair as the socialite sleuths, “Nick and Nora Charles.”  Peter Sellers makes an excellent “Charlie Chan,” stereotypes and all.  I find Elsa Lancaster’s “Miss Marple” least like her counterpart.  Perhaps this is a result of the change from the role’s original conception.

The cast also includes Alec Guiness as the butler, Nancy Walker as the maid/cook, and Estelle Winwood as Nurse Withers.  The film is a must see for any fan of classic mysteries.

Due to the film’s success, Neil Simon went on to write The Cheap Detective (1978), with Peter Falk reprising a “Sam Spade”-type detective parodying such private eye works as The Maltese Falcon.  Fellow castmates Eileen Brennan and James Coco also appear in new roles.  Both film are readily available on DVD.  Of note, Brennan would go on to star in another of The Poisoned Martini‘s favorite films, that happens to have a similar look and feel, Clue (1985).