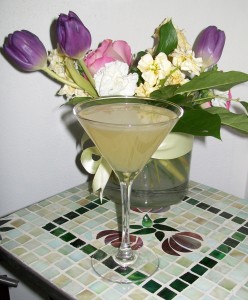 This week’s Friday Cocktail is the Bee’s Knees.

As a phrase, “the Bee’s Knees” became fashionable in early 20th century America, most prominently during the decade of the Roaring Twenties, and became synonymous with the height of excellence.  “It’s the Bee’s Knees!” a young flapper would exclaim.  So that could mean something was excellent or just a bunch of nonsense.  For more about the phrase, and its possible origin and meaning, click here.

Now as for the drink…this throwback to the Prohibition era, calls for rather simple ingredients, but isn’t necessary easy to make.  Adding honey to a shaker with ice can cause it to seize up and then you’d have a honey ball, instead of a well-blended cocktail.

Now I don’t recommend using bathtub gin as did flappers and speakeasy goers of a bygone era.  First of all, that gin tended to taste filthy compared to today’s standards.  One of the main reasons for the drink’s creation.  That and the honey masked the smell of alcohol.  Wouldn’t want anyone to know you were doing anything illegal.  Thank God, Prohibition ended!  A failed experiment indeed.

Bring about a 1/2 cup of water to a boil.  Once it comes to a boil, remove from heat and add in a generous tablespoon of honey.  Optionally, add in a dash or two of orange juice.  Stir until the honey dissolves into the water, creating your honey syrup.  Then pour 1 1/2 ounce of gin and 1/2 of lemon juice in a shaker over cracked ice.  Add 2 ounces of the honey syrup and shake vigorously.  Strain into your cocktail glass of choice.  Optionally, garnish with a twist of lemon peel.

How I like it:  There are various proportions listed online, but I’ve settled on the ones above, which make for a nice refreshing blend.  I also add the dashes of orange juice.  It’s not overtly noticeable, but it bumps up the citrus flavor, blending nicely with the honey.  I tend to go heavy on the honey, too.

Prohibition may be over, but everyone still needs to drink responsibly!