Home › Mystery › Sweetness at the Bottom of the Pie

Sweetness at the Bottom of the Pie 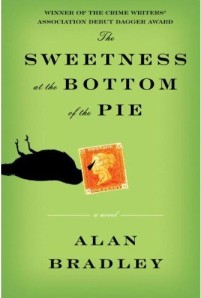 When we first meet Flavia de Luce, she has been tied up and left in a closet.  Does she panic?  Oh, no.  She quite calmly extricates herself and inwardly chides her two tormentors—her older sisters, Ophleia and Daphne—for their ineptness while at the same time planning up a revenge scheme of her own.  Need we point out that she is only eleven?

In the Summer of 1950, Flavia is about to begin her first adventure.  Someone leaves a dead snipe on the steps of her family’s home.  Pinned to the bird’s beak is a rare stamp.  Late at night, Flavia, a light sleeper, awakens to investigate voices coming from downstairs.  She overhears her father arguing with a red-haired man.  Later, she discoveres the mystery man, dying in her family’s cucumber patch.  Upon discovering his body—at the end of chapter two—she remarks:

“I wish I could say my heart was stricken, but it wasn’t.  I wish I could say my instinct was to run away, but that would not be true.  Instead, I watched in awe, savoring every detail: the fluttering fingers, the almost inperceptible bronze metallic cloudiness that appeared on the skin, as if, before my eyes, it were being breathed upon by death.

“And then the utter stillness.

“I wish I could say I was afraid, but I wasn’t.  Quite the contrary.  This was by far the most interesting thing that had ever happened to me in my entire life.”

Her entire life of eleven years!  Flavia de Luce is beyond precocious, borderline sociopathic, and a delightfully unusual sleuth for a mystery story.  An aspiring chemist with a passion for poisons, Flavia is much intrigued by the events quickly happening around her.  Her investigations unearth connections to a previous death, which may not have been the suicide it was perceived to be, and the theft of rare Penny Black stamps.

Some readers may have difficulty swallowing Flavia’s uber-precociousness.  Overall, I didn’t.  After a few initial gasps—she’s only eleven?!—it was very easy to become sucked into the narrative and into Flavia’s world.  I think veteran mystery readers might easily pick out the killer well before the denouement, but this neither diminishes nor spoils the story.  Much of the fun is witnessing Flavia ferreting out clues and piecing this murderous puzzle together.

The Sweetness at the Bottom of the Pie won the Crime Writers’ Association Debut Dagger Award in 2007 and is the first in a series.  Three other Flavia de Luce books have been released with two more listed on Bradley’s official site.   He previously collaborated on the controversial mystery, Ms. Holmes of Baker Street and published The Shoebox Bible, a memoir, in 2006.  According to an interview (here), Bradley, like Flavia, was eleven years old in 1950.   That means he became a published author at age 70!  He mentions Flavia, “walked onto the page of another book I was writing, and simply hijacked the story.”  How typically Flavia!

Flavia is a tour de force.  A worthy addition to the pantheon of British sleuths (though her author is very much Canadian)!