Home › Fantasy › The Company of Wolves

The Company of Wolves 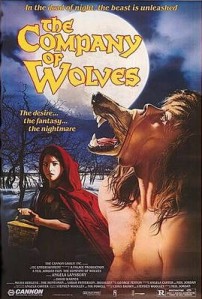 Because I have a love of fairy tales–even if they’re twisted and dark–and as there’s the new Red Riding Hood movie (starring Amanda Seyfried and Gary Oldman) due out soon, I thought I’d revisit a curious movie that is like a waking dream, The Company of Wolves.

In this 1984 version of the Little Red Ridinghood legend, Angela Lansbury plays a china doll-like grandmother, but don’t be fooled.  This is not for the children.  As in the forthcoming 2011 movie, werewolves haunt this tale.

The story centers on Rosaleen, a teenager living in present day England, who dreams of wolves.   Perhaps this is because her grandmother tells her horrific tales of werewolves who prey on young women.  In particular, Granny warns her not to stray from the path and beware men who’s eyebrows meet.  It’s in how Rosaleen strays from the path that is unusual.

Is Rosaleen dreaming?  What exactly is real in this tale?  Is the story past or present?  You may find yourself asking these questions as you navigate the interwoven tales in this film’s narrative.  Much of film is set in a forested medieval milieu.  But it could almost be said to be the landscape of the mind.

The Company of Wolves is difficult to categorize.  There are elements of horror, fantasy, eroticism, and psychology.  Steeped in folklore and archetypal imagery, the central narrative of the story would appear to portray Rosaleen’s rite of passage to becoming an adult.  The film’s imagery suggest a Freudian or Jungian exploration of this young woman’s psyche.  Personally I feel Jungian psychology is more apt here.

Viewers will certainly come away with their own interpretations and opinions of The Company of Wolves.  Though a film, it comes across as more of a literary text.  One that could be explored in depth for meaning, symbolism, and psychology.  It is certainly worth watching more than once.

Directed by Neil Jordan and written by Angela Carter, this movie has become a cult classic.  Carter has also written stories related to the movie, though I haven’t had the opportunity to read them as yet.