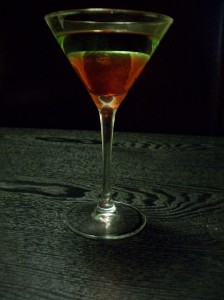 I’ve tried a lot of mixed drinks over the years, but it wasn’t until coming up with the name for this site that I discovered this cocktail: the Poison Apple Martini.  Celebrated The Poisoned Martini’s 4th Anniversary with this deliciously sweet cocktail!

With the advent of the Appletini around the mid to late 1990s, it’s not surprising that a “poisoned” version arrived on the scene.  The taste is somewhat like a candied apple, but lacks the caramel flavor.

This variation of the Appletini is perhaps the oldest recipe for a drink with this name.  There are, however, a myriad of variations out there, and the recipes can vary greatly.  Some use rum as the base instead of vodka, and others use cranberry juice instead of grenadine.  Almost all of them use some sort of apple-flavored liqueur.

For a layered effect (as pictured), pour 1/2 ounce of grenadine into a cocktail glass.  Gently pour the remaining ingredients over the back of a spoon.  First add in 1 1/2 ounces of your choice of vodka, then 1 1/2 ounces of apple schnapps.  Optionally, garnish with a slice of apple or a maraschino cherry per your preference.

Alternatively, add the grenadine to your glass.  Then in a shaker over cracked ice add in your vodka and apple schnapps.  Shake and then strain into your cocktail glass.  This second option likely won’t layer properly, but makes for a pleasantly chilled version.

How I like it:  It’s not necessary to layer this drink, but the effect lends itself to the “poisoned” name.  You may also consider using a flavored vodka, but choose carefully.  Citrus-y flavored vodkas work well, and a caramel flavor would capture that candied apple taste perfectly.