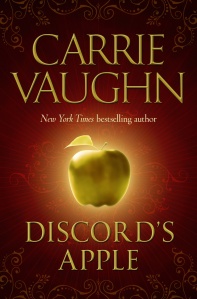 Evie Walker’s father has long held a secret that she is aware of, but doesn’t understand.  In the storeroom beneath her family home in a small Colorado town, a myriad of objects lay waiting to be claimed or kept from falling into the wrong hands.  Glass slippers, a golden fleece, Excalibur…

Now Evie’s father is dying.  At the start of the novel, she’s driven all night to Hopes Fort, Colorado, not realizing something more than her father’s ill health has compelled her to come.  Arriving in town, she’s stopped at a checkpoint.

” ‘I’m the last person to complain about security,’ ” says Evie, remembering that “with better checkpoints, her mother might still be alive.”

Evie’s world–in this alternate reality–is a dangerous one.  Countries have nuked one another, rations have been put in place for goods, and civil defense posters warn against strangers.  Most recently, the Kremlin is bombed by a kerosene filled plane.  This latest act, attributed to Mongolian rebels, causes a problem for Evie. “The Eagle Eye Commandos couldn’t raid the building complex if it wasn’t there.”

Evie writes the story of the Eagle Eye Commandos, a successful graphic novel, that is set in her contemporary world and thus effected by real time events.  “She’d spent the last few years using Tracker and the Eagle Eyes to stop as many terrorists as she could.”  Tracker, a female commando, serves as an alter-ego for Evie who feels powerless to stop the madness in the world around her.  Later, we see her write about Tracker’s adventures and how they mirror Evie’s growth as heroine.

However, Evie’s is not the sole narrative of the story.

Chapter Two brings us back in time to the end of the Trojan War.  Sinon, mentored by Odysseus, must convince the Trojans of a lie.  He tells them the Greeks have left.  He was to be made a sacrifice for fair winds.  As for the horse, it was built to appease Athena and made large so the Trojans could not carry it inside their city.  Though the seer Cassandra warns against Sinon’s lies, she is not believed.  The wooden horse is brought inside the city, and doom will descend upon the Trojans.

As the Greeks sack the city, Sinon watches from the temple of Apollo.  He encounters Cassandra, with whom he has a sort of detente.  She tells him, “It was the gods.  The gods have played us.”  After the Greeks come to claim Cassandra for King Agamemnon, Apollo takes Sinon prisoner as compensation for the loss of his priestess.  “You will feel what is being done to the women of Troy.  You are now my slave,” Apollo tells him.

In the present day, an elegant woman comes to Evie’s door.  “I wondered if you might have something for me.”  Evie, or rather the Storeroom, doesn’t hold anything that belongs to her, but the woman tries to force the issue.  Fortunately, the young man Evie had met earlier rescues her from the encounter and speaks in Greek to the mysterious woman.  The woman leaves, and Evie wonders about her “hero.”

Later, the woman–“in her own mind, she was still the Queen”–speaks with a minion about gaining entry to the Walker house.  The mischievous minion approaches Evie, but the young man, Alex, comes to her rescue.

The narratives begin to become clear, and the sought after prize is the legendary apple that brought about the Trojan War.

It began with a wedding.  The sea goddess Thetis married the Argonaut Peleus.  They would beget Achilles.  But first they feasted in grand fashion with the gods and goddesses of Olympus numbering among their guests.  One goddess, however, had not been invited.  Eris, goddess of discord, crashed the event and presented a gift, a golden apple inscribed “for the fairest.”  She sent it rolling across the floor.  Three rival goddesses…Hera, queen of the gods; Athena, goddess of wisdom; and Aphrodite, goddess of love…claimed the prize.  Zeus, not wanting to take the decision upon himself, assigned the task of awarding the apple to a shepherd prince, Paris.  The promise of the most beautiful woman in the world won Aphrodite the prize, and the beginning of the Trojan War was set in motion.

Now, it is Hera who wants Evie to give her the apple, and she will stop at nothing to get it.  But for what purpose does she want it?

“Magic’s going back into the world,” says Evie’s father to her.  “In the last month, I’ve had a dozen people come asking for what belongs to them…”  And Evie comes to a realization about her role in protecting the Storeroom.  “She was tied to this place, even as her world fell apart around her.  Discord everywhere.”

Have the gods of old descended once again like “giants among men… moving people like they were game pieces” for some amusement or something more sinister?

This standalone title from author Carrie Vaughn, best known for the Kitty Norville urban fantasy series, draws readers into its dangerous world to discover the mysterious origins of the Storeroom.  How the book ends may be a bit odd, but its nonetheless satisfying.

A huge plus–for me–is that Vaughn knows her Greek mythology and how to craft it anew without distorting its essence.  For instance, in the original myths, Sinon disappears from the story after his task is done, and Vaughn uses this to great effect.  The gods, mainly Hera and Apollo, seem true to their established natures in the available lore.  As such, Discord’s Apple will especially appeal to fans of Greek myth.