Welcome to Carrington Hall, a creepy seaside mansion on a hill! Or as one character says, “If there wasn’t anybody living there, it’d be a haunted house.”

Our story begins with a car accident. Oh, don’t worry! No one’s killed…yet.  Anne Carrington (Carole Landis) and her dear friend Gail Richards (Joan Blondell) are on their way to Anne’s family home when their taxi crashes. Through determined means, they hitch a ride with Cosmo Topper (Roland Young) and his chauffeur, Eddie. Too bad Topper’s wife (Billie Burke) sees them drive by!

The ladies are safely dropped off and soon meet the sinister servants and Mr. Carrington’s doctor, who apparently lives on the premises. Dr. Jeris is concerned that his patient is too frail and should not be overexcited. So Anne has a brief reunion with her father and learns that, by the terms of her mother’s will, she’s inherited Carrington Hall. We are just about to learn of the tragic circumstances surrounding Mrs. Carrington’s death when the doctor interrupts. Then, on her way to her room, Anne is nearly killed by a falling chandelier.

The ladies are to stay in adjoining rooms, but Gail sees Anne’s bedroom and remarks, “Where’s the glass slipper that goes with it.” Graciously Anne switches rooms with her friend. In the dark of night, a cloaked figure enters the room and murders Gail. It may not seem like it, but the madcap comedy is about to begin.

Remember Cosmo Topper? He tries to live a normal life. Unfortunately, the restless spirits of the afterlife won’t leave him alone. When she’s murdered, Gail’s ghost finds her way to the Toppers’ residence. There, she convinces Topper to investigate her death. Of course, Topper is the only one who can actually see Gail, but other characters, most notably the Toppers’ chauffeur, Eddie, witness ghostly footprints in the snow and doors opening and closing by themselves.

Upon sneaking into the Carrington house and discovering the body, Topper tells Gail, “This is positively horrible. You’ve been stabbed!” While attempting to phone the police, Topper rouses the household…well, at least the doctor and the servants. He explains about the body, but of course, when they go to investigate, it’s gone!

Meanwhile, Mrs. Topper is suspicious of her husband leaving in the middle of the night. She questions Eddie, the chauffeur, and learns that Topper has gone to the Carrington house. Mrs. Topper, her maid, and Eddie then join the antics that have just begun at Carrington Hall. 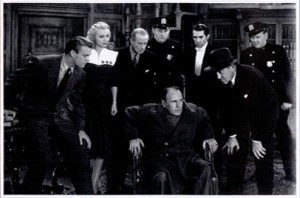 Careful, Topper! Sitting in that chair is dangerous.

Some choice comedic moments include Mrs. Topper arriving to find her husband, calling the police, and then helping herself to cake in Carrington’s kitchen; Topper trapping everyone in the icebox; almost all of Eddie’s incredulous expressions; the gathering of the suspects in the sitting room after the “re-discovery” of the body; and the detective watching Topper dealing with a tipsy, unseen Gail.

This third adventure in the Topper comedy-mystery series is based on fictional characters conceived by Thorne Smith. The 1941 film starred Blondell, Young, Landis, and Burke with supporting cast members: Eddie “Rochester” Anderson, Dennis O’Keefe, Patsy Kelly, and H. B. Warner, among others.

In addition to the Topper movies, Roland Young (1887 – 1953) also starred as William Henry Blore in 1945’s And Then There Were None. Billie Burke (1884 – 1970) is most well-known to audiences from her role as Glinda in 1939’s The Wizard of Oz, and Patsy Kelly would go on to star in another of The Poisoned Martini‘s favorite films, The North Avenue Irregulars in 1979. The feisty Joan Blondell (1906 – 1979) starred in numerous roles, including the role of Lottie Hatfield in TV’s Here Come the Brides. Sadly, Carole Landis never achieved stardom and committed suicide at the age of 29 in 1948.

Now a word about Eddie “Rochester” Anderson (1905 – 1975). With his gravely voice, he was a comic legend who turned a bit part into a regular gig on the Jack Benny radio show. In fact, during the course of Topper Returns, he threatens to go back to Mr. Benny! African-American actors of the 1930s and 40s were often relegated to “servile bits.” Here though, Anderson has some of the best lines, often upstaging other cast members. True, the role is a bit stereotypical of the time period and the scenes with the seal are a bit much, but ignoring that, Anderson’s character is in many cases smarter than the rest. He may not want anything to do with ghosts, but without him, Topper would never have solved the case!

Topper Returns was preceded by Topper in 1937 and Topper Takes a Trip in 1938. Though one might say, the third film is the best in the series. The special effects, for the time, are an amazing spectacle. The sleight of hand in creating the ghostly effects hold up to today’s standards. How do you get a ghost to smoke a cigarette? Though in one scene, where the ghost changes into more sensible clothes, eagle-eyed viewers may notice the “invisible” wires manipulating the dress.

Topper Returns is a delightful film with bountiful comedy and enough of a mystery to keep viewers guessing. With secret passages, screams, damsels in distress, a little romance, and even a car chase, this story will keep you on the edge of your seat with laughter and suspense. Topper Returns is readily available, so look for it where you rent or buy movies.