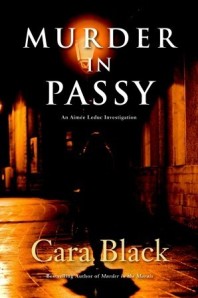 “You think life finally makes sense, then…Pouff, it turns upside down,” says Commissaire Morbier to his goddaughter, Aimée Leduc, in the opening pages of this eleventh book in the Aimée Leduc Investigation series.  It’s Aimée’s first day back to work after a month’s recuperation from “the explosion that had laid her low on her last case,” Murder in the Palais Royal (2010).  Morbier, however, is presently worried about his paramour, Xavierre, and asks Aimée to check in on her.

Not long after Aimée visits her, Xavierre is found strangled in the garden of her townhouse.  But is her death connected to the ETA, a Basque terrorist group?  Or is it as the police believe, a simple crime passionel?  After twenty years apart, Xavierre and Morbier had reconnected and rekindled a romance.  Now, the police are quick to target Morbier—one of their own—as their prime suspect, so it’s up to Aimée to uncover the truth.

Chic and single, Aimée lives on the Ile Saint-Louis in a seventeenth-century townhouse with her bichon frisé, Miles Davis.  She runs Leduc Detective Agency, a survellaince outfit, along with her dear friend, René Friant, a dwarf and computer expert.  When she learns of Morbier’s arrest, she doggedly pursues the Basque connection to clear her godfather’s good name.

When Aimée visited Xavierre and Xavierre’s daughter, Irati, she sensed something was wrong.  Mother and daughter were afraid of something…or someone.   But why?  Xavierre’s was busily planning her daughter’s upcoming wedding to orphaned Basque, Robbé.  So what could there be to fear?

The answer lies in Xavierre’s past.  “Everything’s political with the Basques,” Aimée learns.  And Xavierre, a Basque, was involved with two men who were political activists during turbulent times in the early 1980s.  One of these men is Agustino, a painter, living quietly in Paris and who claims he has given up that life.  Yet his nephew, Jorge, has hidden incriminating canvas bags, bearing the imprint of Imprimerie Nationale, in Agustino’s atelier.

Morbier was en route to Lyons to investigate the Imprimerie Nationale heist, which resulted in the death of a flic, as police are often referred to in this series.  In a later conversation with her godfather, Aimée learns there may be a leak in the police force.  Could it be a bent flic murdered Xavierre to put blame on Morbier and derail his investigation of a flic killer in the Imprimerie Nationale heist?

The story takes a turn, and the pace ramps up significantly, with the introduction of a Spanish princess.  The party girl princess is scheduled to attend a reception where a peace accord is too be announced; an event Aimée manages to snag an invitation to as part of her investigations.  But when Basque militants kidnap the princess, Aimée will have three hours to avert an international crisis and learn the truth behind Xavierre’s death.

Murder in Passy centers on Paris’ 16th Arrondissement.  Each of Cara Black’s books in the series have focused on one of Paris’ twenty arrondissements.  The narrative beautifully evokes modern Paris with language that could be describing an impressionist painting.  Some examples:  “In the pale lemon light, a lone seagull squawked on the quai and the clouds floated over the jagged Left Bank rooftops.”  “The Louvre’s lit limestone facade glowed like misted pearl.”

Having read the twelfth book, Murder at the Lanterne Rouge (see review here), prior to this one, I had learned a few details about the plot of Murder in Passy, but nothing more than what would be inferred from reading the book’s jacket or considering the nature of series books.  Still, this is one series that benefits immensely from reading it in the proper order.  The subplot involving Aimée’s family, particularly her mother, is a story arc threading through the books that might confuse readers, if read out of order.  Although I don’t know if I would have paid much attention to the mention of René dating a woman he met in a dojo and dining with her parents at a Chinatown resturant, if I hadn’t first read Murder at the Lanterne Rouge—in which this is greatly expanded upon.

Of note: some reviewers, and readers, have noted that Murder in Passy contains a discrepancy related to Franco’s dictatorship in Spain.  Franco died in 1975, but related events in the novel are said to occur in the early 1980s.

Otherwise, enjoy this visit to a ritzy neighborhood of Paris while enjoying a fine wine, and maybe cheese or chocolate.  Or maybe try a glass of the sweet Basque liqueur, Izarra—mentioned during the course of the story—perhaps with some olives from the region…